Menu
"If I gave you another thousand dollars, could I make someone poor watch me eat it?" –Stephen Colbert

“If I gave you another thousand dollars, could I make someone poor watch me eat it?” –Stephen Colbert 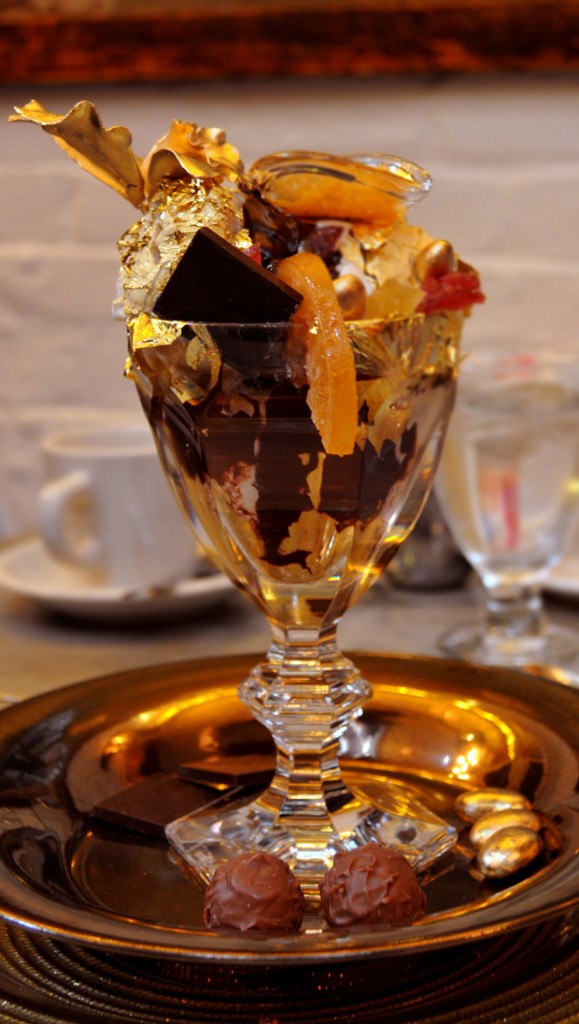 Google the words The Golden Opulence and all you’ll find are a few blurbs about the fancy ingredients and a video of Stephen Colbert dining and dashing on the expensive dessert.

Alister & Paine brings you the exclusive scoop, pun intended, on what it’s like to eat gold.

The sundae was created to celebrate Serendipity 3’s 50th anniversary, and has been a hit at the legendary ice cream shoppe every since.  (They also serve a $25,000 Frrrozen Haute Chocolate…I think we’ll be back for that. Apparently crazy overpriced desserts are the latest obsession).

I tried to eat all $1,000 of decadence as daintily as possible…until I reached the last scoop of vanilla.

When I stumbled into a tucked away pocket of Amedei chocolate on the second bite I had to fight the spoon of the man I foolishly brought with me and have a quiet little chocolate orgasm, right in the middle of Serendipity 3, Meg Ryan a la When Harry Met Sally style.

The Whisk(e)y Report: Part One

The caviar was Grande Passion, so surprisingly salt free. I’m always up for a culinary challenge…but ice cream and caviar really shouldn’t try and be friends for too long. Acquaintances, perhaps.

I sucked, licked, and pried any leftover ingredients from my fingers, my spoon, anywhere I could find a trace of a $1,000 well spent. With only the empty Baccarat Harcourt crystal goblet left as a souvenir, I think I found dessert nirvana.

*Tried & Tested. Alister & Paine practices old-school journalistic integrity. We only write from experience–never press releases. If we haven’t tried it and loved it you won’t find it in our magazine.