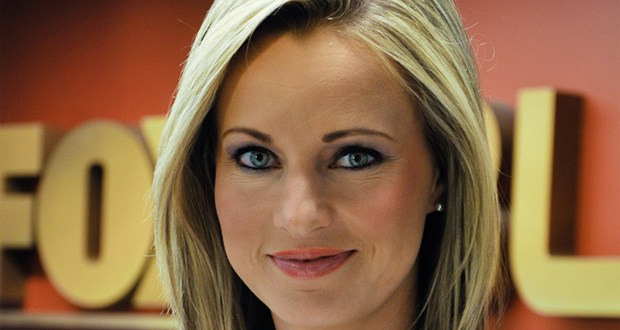 Sandra Smith is an intelligent, vibrant glamazon of a financial advisor and one of Fox’s rising stars. Her passion for the trade floor is infectious and her work ethic admirable. Sandra is a Chicago native who grew up on the trade floor and ended up as one of America’s favorite financial experts. We found a break in her crazy busy schedule for a cup of coffee, a little advice and some insight on how this Illinois girl accidentally became a reporter.

Alister & Paine: How did you get involved in the stock market world?

Sandra Smith: My father introduced me; he was a trader in Chicago. He was an integral part in introducing me to business and finance. I was the youngest of 6 kids, one of 5 girls. He was really good at showing each one of us what he did and what was going on downtown. I just took to it.

Alister & Paine: How did you move from the trading floor to television?

Sandra Smith: Right out of college I started with a couple hedge funds in NY. The managers there quickly realized this wasn’t altogether new to me. So this old Virginia cigar smoking man helped and inspired me to take my test to become a registered stock broker. A few years later my firm asked if I could go on TV from the trading floor, they wanted me to just talk about our customer order flow, what I was seeing over the desk, just get the company’s name up on the screen. Little did they know, a month later the television stations were calling wanting to talk to me.

I was nervous. It really happened organically. I always knew that I wasn’t shy and didn’t mind cameras, doesn’t bother me a lick. When I hopped on there it was so natural to me.

Alister & Paine: Why do you think you were so popular with Bloomberg and now at Fox?

At Fox, you could be going on Fox News, Fox Business, or an affiliate like Fox 5 in New York. You need to just know how to change your language. Mom and Pop investor need to be talked to differently than the hedge fund manager, the institutional multi-million dollar investor. You have to be able to accommodate your conversation for different types of investors.

Alister & Paine: How do you keep your audience interested?

Alister & Paine: What’s the best piece of business advice you were ever given?

The change in the media environment is so important that you must adapt, move forward and change when needed.

Sandra Smith: A lot of people are always looking ahead, that’s classic advice we always hear. But everybody has to live in the day and do the best they can every single day. I’m a reporter, and everyone always says well what are your big goals, do you want to host your own show? Guess what. I have a job to do and it is to be the best reporter I can, every single day. If you’re thriving on a daily basis, the long term will come.

Alister & Paine: How does it feel to work as a woman in a male dominated industry?

Sandra Smith: Women don’t need to say they are equal to men. I’m not saying we’re better or worse, we just have qualities about us that we should be accentuating and allowing to flourish. Whenever I’m on a team, especially with all men, there are definitely qualities that women possess that are very strong in a business environment and a reporting environment.

Sometimes when you’re around a lot of men you feel the need to prove yourself, throw out what you know or where you’ve been or what you’ve done but women need to leave that behind. If you’re confident and know where you can from you really need to be yourself. It’s very important to just hold your own be confident with who you are at what point you’re in in your life and just be yourself. Carry yourself well. Look good. Be confident.

Alister & Paine: Do you think you got the job because you’re a beautiful woman?

Sandra Smith: No, I don’t think I got on TV for my aesthetic appeal. At the time it was bull market for stocks, my company was doing well and I had hedge fund customers all over the country. I was very knowledgeable about what was happening over our trading desks on any given day. I had accumulated a very big basis of clients so what I was seeing and what I had to say was important.

My reporting is benefited by the fact that I used to be sitting there as a trader listening to financial television. I knew what was fluff and what wasn’t. I know when to go on air and what will grab people’s attention, and what will be believable and credible.

Alister & Paine: What is your favorite part of the job?

Sandra Smith: It’s being in the middle of the most important, biggest happening things. If I wasn’t in the news business I would be lost. I love the markets, figuring out why something is moving and what else it could affect and what could happen tomorrow. I love putting the puzzle together as well.

I don’t believe in luck. You can make your own path. You can’t just pick a destination. Instead of working towards that goal you have to lay the foundation first.. It’s work, but it’s fun. If you love what you do you never work a day in your life.