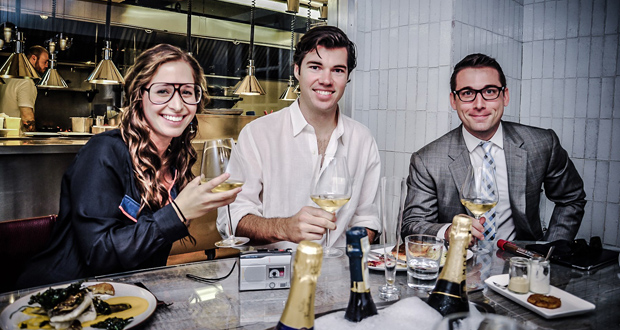 Around the Table with Brendan Marshall, CEO of Kitchit

Kitchit co-founder Brendan Marshall is a bright young entrepreneur with a penchant for great food and a passion for building things. Originally an investment banker, Brendan left the world of M&As to merge his love of technology and food. What started as a ‘cute concept’ is now one of the hottest new companies of 2012. The idea is simple—connect consumers directly with top professional chefs who create everything from world-class gastronomic adventures to casual dinner parties.

We sat down for a decadent four course lunch at Park Avenue Autumn’s Chef’s Table with Kitchit Chef Kevin Lasko to pick Brendan’s brain on the restaurant revolution, his love of food and the connection he makes between the chef and the diner.

Alister & Paine: Tell me how you founded the company.

Brendan: Kitchit kicked off while I was at Stanford studying business. Everyone there is trying to push the boundaries of what’s possible. We were accepted to an accelerated program called StartX, a student run organization dedicated to helping startups. So we did StartX, then raised the seed round and we’ll probably do a series A in the next 3-6 months.

Alister & Paine: How do you decide which chefs to work with?

Brendan: There’s an element of experience where they have a pedigree of sorts…they know how to cook. They are real chefs. The other piece is the personality component. We’re not going to send a Gordon Ramsey into somebody’s home. Chef Kevin Lasko is a great example of the ideal Kitchit chef. He makes food fun.

Alister & Paine: Who is your typical client?

Brendan: We have two types of consumers. There’s the young urban professional. These are people who definitely don’t know how to cook but are really into food…very much like me! They use Kitchit to dine in instead of dine out. The second are families. People who have kids or a space to entertain in. They’d rather throw a dinner party and spend the time at the table with their friends instead of in the kitchen.

Alister & Paine: What marketing campaign has been the most effective?

Brendan: Word of mouth has been by far the most effective marketing. Intuitively that makes sense but we’ve been surprised with the amount of customer requests we’ve received to expand to certain cities.

Alister & Paine: As an entrepreneur, what are your thoughts on government regulations?

Brendan: Less is more. A startup is about creating things and growing as fast as possible—there’s a lot of red tape along the way. I understand the red tape comes from somewhere, but at some point you think where’s the logic? If I could follow the logic behind it that would help.

Alister & Paine: How do you stand out in the ‘chef for hire’ industry?

Food helps you remember who you are. That connection is incredibly powerful.

Brendan: We are a stage for the chef. You go and see their profile and interact with them directly. We’re not trying to be the middleman. The huge difference in what people are really responding to is that we’re getting out of the way. We’re showcasing the chefs, finding these great talents and using Kitchit as a platform to connect them with the consumer.

Alister & Paine: How have the chefs responded to the new platform?

Brendan: When anything is new, especially in a relatively old school industry, there can be skepticism. We’ve earned a great reputation of taking care of our chefs and that Kitchit is really meant to protect them. The chefs like it for the business itself, then are the extra perks where they’re getting extra exposure. For restaurant chefs it’s effective marketing because once they go into a home of an ideal consumer they bring a very loyal following back into the restaurant. That’s the hospitality, experience and connection that are missing from a lot of restaurants today.

Alister & Paine: What’s the best part of the job?

Brendan: [Gestures to the chef’s table full of gourmet food]. This is part of my job. It’s pretty ridiculous.

Alister & Paine: Do you think we’re changing the way we address dining?

Brendan: Everyone loves food. There’s a knowledge gap of how much they actually know about it. We are going through these trends where we commoditize the food experience. You can go to rural places in the U.S. and only find fast food restaurants because that’s what they eat. There’s a loss of the culture around that. Now people are taking food seriously. They have access to information they didn’t before, they can learn at their own pace. You’re no longer restricted to being in San Francisco or needing to go see Alice Waters.

Alister & Paine: How do you feel the restaurant world has changed in the past decade?

Brendan: We have to eat, we’ve always needed to eat. Restaurants are speaking to that. It used to be very dramatic tasting settings. It felt like you were in a museum, everyone very hush-hush. Now it’s about watching the chef cook or talking about where the ingredients are actually from. Let’s have fun with food. The settings are becoming much more casual than before. The prices aren’t changing, but the settings are more casual.

The chefs that are really cutting edge artists are saying we can do more with food than what’s been done in the past and still be true to who we are.

Alister & Paine: Who are some entrepreneurs that inspire you?

Brendan: The childhood hero is Richard Branson. You probably know the guy. We can definitely do a Kitchit dinner out on Necker Island. I really appreciate his philosophy and work ethic.

Alister & Paine: What would you chose as your last meal on this earth?