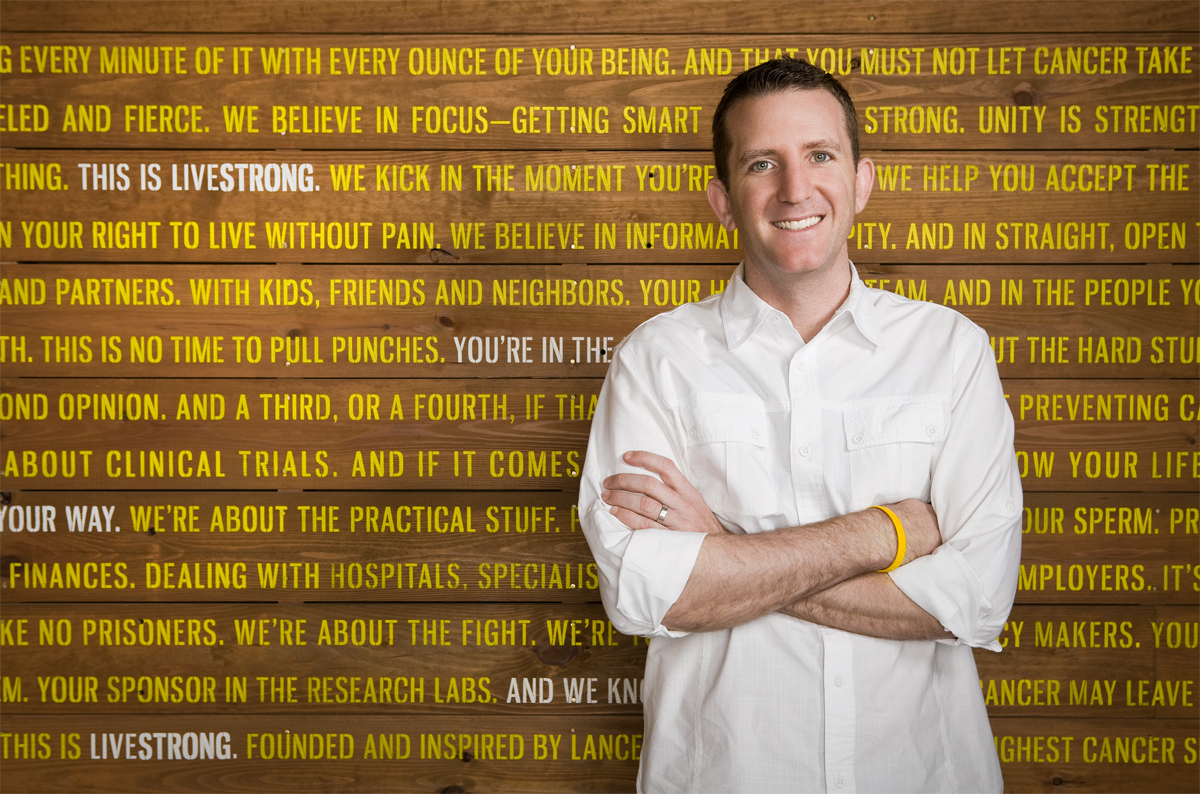 Doug Ulman, CEO of Livestrong, on Leadership During Adversity

The idea started with cancer survivor Lance Armstrong and four friends having tacos fifteen years ago. Today, LIVESTRONG is a symbol of hope and inspiration to people affected by cancer around the world. Since its inception, the organization has raised $450 million for the fight against cancer. From Team LIVESTRONG cycling events to Triathlons they completely embody their namesake—to truly live strong.

Doug Ulman brings that survivor attitude with him in his daily role as the foundation’s CEO. We sat down with the man behind the brand that continues to empower people to take action against cancer for a candid talk on the adversity LIVESTRONG is facing since Lance Armstrong stepped down as chairman, what a company can do to survive and how life is way too short to be miserable.

Alister & Paine: Tell me how LIVESTRONG was founded.

Doug Ulman: The organization was founded in 1997 by Lance Armstrong and four of his friends. He and his friends were sitting around talking about wanting to do something to help others. They said let’s raise some money to help people with cancer.

LIVESTRONG the brand didn’t come until 2002. We were creating an online program for cancer survivors and had 400 beautiful stories of survivors. What we didn’t have was a name. The brand name came from a focus groups of survivors. Survivors feel ownership over it. It wasn’t a big corporate brand, so that authenticity is intact. In 2004 Nike came to us and told us they wanted to put LIVESTRONG on this yellow wristband. I’ll never forget what one of the Nike marketing folks said to me…they said “LIVESTRONG could be your Just Do It.”

Alister & Paine: How did you become involved with LIVESTRONG?

It’s so easy to go to work every day. We want to help more people. I get up at 5am every day and I’ve never had a problem getting out of bed. I jump up every morning.

Doug Ulman:  In 2001 they wanted to create their own programs, so they hired me. It was a dream opportunity. I was 23 years old and it was awesome. I was diagnosed with cancer when I was in college and had started a nonprofit for young people with cancer. I was doing that as a volunteer from my dorm room and that’s when Lance reached out to me.

Alister & Paine: You are facing a lot of adversity right now—how does an organization survive a time like this?

Doug Ulman: Adversity can build strength. Cancer survivors and their families are counting on us; we have to always stay focused on their needs. As much as everything else is a distraction and can be overwhelming and frustrating and disappointing the bottom line is our mission is to serve people with cancer. We have to be transparent and be realistic about everything that’s going on. No adversity is easy. One of our team members said ‘This isn’t the worst thing in the world.’ They put it in perspective.

Alister & Paine: What are important leadership traits to remember during difficult times?

Doug Ulman: Stay focused on whatever you’re trying to accomplish. Over communicate with your staff, your board, customers, whatever industry you’re in. You can only benefit and gain from over communicating and bringing people in to be a part of the whole process.

Alister & Paine: How does Lance Armstrong stepping down affect the company? Have you announced a new chairman yet?

Doug Ulman: Jeff Garvey is now our current chairman; he started Austin Ventures the largest venture capital firm in the Southwest. Lance has always been our founder but he’s only been chairman for the last 5 years since he sort of retired from cycling. Our board is as committed as ever. From a governance perspective we’re in great hands.

Alister & Paine: What is your take on Lance Armstrong stepping down as Chairman and being stripped of his titles?

Doug Ulman: It doesn’t change the fact that he founded the organization before he ever won the Tour de France. It also doesn’t change the fact that his cancer experience was so similar to so many people who are diagnosed today. He didn’t have insurance, he wasn’t sure if he was going to lose his fertility, he didn’t know where to go to get the best treatment. A lot of the programs at the foundation are designed to help people in that situation. It’s been a frustrating experience because it’s just been going on for a long time…but we have to stay focused on our mission.

Alister & Paine: How do you feel about it personally?

Doug Ulman: It’s not something that I spend a lot of time thinking about. Lance and I are on very good terms. He and I talk regularly. Lance has become a very close friend of mine over the years. It’s not something that other than now, with the current media storm, has impacted what I do day to day. People have their own opinions but it’s never impacted how we go about our work and how we do things…until now, with the distraction it’s caused.

Four Steps to Being a Successful Business Visionary

Alister & Paine: What has been your social media strategy?

Doug Ulman: A lot of people look at Twitter and Facebook as a way to get their message out. We don’t look at it that way. It’s how do we use these platforms to achieve our strategic priorities. It’s community building. People want to be part of something bigger than themselves and a community that’s positively impacting their lives.

Alister & Paine: Where would you like to see LIVESTRONG from a global impact position 5 or 10 years from now?

Doug Ulman: We have three primary long term strategic goals. One is navigation. We want to expand our navigation services to people regardless of who they are, where they live, how much money they have, color of their skin, what have you.

Second we want to make sure cancer is near the top of the global health agenda, because it hasn’t been and it’s the number one cause of death around the world. More people will die of cancer this year than AIDS, malaria, tuberculosis combined and no one’s talking about it. We’re all invincible. I was 19, an athlete, I was healthy as can be and I got cancer.

The third long term strategy is around the LIVESTRONG brand. The brand has tremendous potential just as a brand and for the foundation it can generate significant revenue and allow us to continue to do these programs in a big way without having to be a traditional fundraising organization.