An Interview With Chef Patrick O’Connell

Chef Patrick O’Connell started cooking 40 years ago in an old farmhouse with just a yard sale electric frying pan. Today he is the self-taught acclaimed chef and, of course, the proud bearer of two Michelin stars at The Inn at Little Washington in the foothills of the Blue Ridge Mountains.

The confirmation of his two Michelin star renewal was announced by the French Embassy yesterday. We interrupted Chef mid-photoshoot (he was having afternoon tea with a dog) for a heart to heart on how he turned a defunct gas station into a luxurious Relais & Châteaux property and what those two illustrious Michelin stars mean to him.

Jenna Marie Bostock: Tell me about the start of the Inn—you had a very humble start, going from gas station to two Michelin stars in 40 years, that’s pretty incredible. How did you get here?

Chef Patrick O’Connell: I have a theory that every human being has a specific geographic spot in the universe where they belong, and if they find their spot everything will fall into place. When I lived in the city—born in D.C., raised in the suburbs of Maryland—I had a thousand different interests. It was hard to focus. In those days parents were not happy if their children wanted to work in a restaurant, it was akin to joining the circus. I couldn’t decide what I wanted to do with my life so I bought a rail pass and went to Europe. I had worked in restaurants since I was 15 years old but it was considered something you did for spare change.

Before I left I bought a little mountain shack here in the foothills of the Blue Ridge. It had 3 acres and 8 wrecked cars and an outhouse and a dump. It was my little slice of heaven.

I traveled around and as I came to France I realized that I had a whole different perspective on what the possibilities of being a chef could be like. I saw a very different cultural respect there for all things related to food and chefs, people peering into pastry shop windows and chefs being the new aristocracy.

When I came back I decided I was going to cook, one way or the other. I also realized I had found my spot here in the mountains. I opened a little catering business with a friend, using only an electric frying pan that we bought at a yard sale and a wood burning cook stove. By that time I had sold the shack and traded it in for a slightly larger farmhouse on the other side of that mountain.

To our great surprise the catering business took off like a rocket—people out here were starving for something they couldn’t find at the supermarket 40 miles away. And they loved to entertain. About 50 local families started passing us around, and we started doing all the events and catered parties in the area. Pretty soon everyone started telling us that we really should open a restaurant.

We first thought of opening it in the old farmhouse, but it happened to be on the wrong side of the river—accessed only by a plank! Instead we came to the little crossroads of Washington VA. The population was 150 at the time—it has since dropped to 133. We rented half of a defunct garage on the corner of Main and Middle streets for $200 a month. It was definitely humble beginnings but we invested in a real kitchen and put everything we had into converting the garage. Fortunately, we had an option to purchase at the end of the first year. Just weeks after we opened the Washington, D.C. newspaper that was the competitor to the Washington Post proclaimed it the best restaurant in a radius of 150 miles. Within a few months the Washington Post put us on the cover of their weekend magazine. We really didn’t come up for air for 10 years.

Jenna Marie Bostock: Wow. What did you do, once you finally came up for air?

Chef Patrick O’Connell: Perhaps the smartest thing we ever did was at the end of the first year we closed for the month of January and went on a gastronomic pilgrimage to the greatest restaurants in the world, focusing very much on those that were outside urban centers in the French countryside, Michelin two or three star properties.

That inspired us to realize that if it was possible to do there, in out of the way places, that ultimately America might embrace the idea here. At the time we didn’t have a role model in the U.S. to look to. We continued these little pilgrimages every year and measured ourselves against what they were doing in France and elsewhere, which started including other countries. We would go to England and visit the country house hotels there, even to Asia and Hong Kong and Japan. We began to notice that the gap between what they were doing and what we were dong began to narrow.

One day, after about 18 or 20 years, it did not seem as though there was any gap at all. We had become a member of Relais & Châteaux, the wonderfully prestigious association of small luxury hotels and restaurants throughout the world, and even though Michelin had not yet come to Washington we had a sense of where we were in the international spectrum of things. It did help that Craig Claiborne, who was then the NY Times food editor and restaurant critic, claimed that he’d had the best meal of his life here. People started coming from near and far. We’ve just been evolving every day since then, time goes by in a whoosh.

Jenna Marie Bostock: How were you able to stay so focused and stay the course?

Chef Patrick O’Connell: It helps to have an inspiration or a model. I always tell young people that sometimes I’ll pass a sign that will say ‘Best Hamburger in Town,’ and I’ll think ‘Oh how shortsighted. What’s wrong with best hamburger in the State or in the U.S.? I mean, how hard could that be?’ The first thing you have to do is establish who has the best hamburger, or the best anything, in the world and study it. Be your own harshest critic and compare yourself.

Jenna Marie Bostock: How do you stay true to your original vision and still evolve with the times?

One of the things we lament is that very often you’ll run into someone, particularly a New Yorker, who will say ‘Oh yes, I’ve been there, but it was 25 years ago.’ They have the misconception that whatever they saw, felt, or experienced 25 years ago must be exactly as it is now because it’s atypical for restaurants to evolve as much as we have.

Each year you have a continuity but you barely resemble what you were doing the year before. It is important that people understand that it’s a very different more evolved place now than it may have been in its humble origins. Hopefully in 5 years it will be even more so.

Jenna Marie Bostock: It seems like a wonderful work environment, your whole team works seamlessly as a family of sorts. Did you strive for that company culture or did it happen organically?

Chef Patrick O’Connell: Well, that’s a very astute question. My sense is that creative people have to be at ease and comfortable to maximize their talents, otherwise they will shut down. If you want to make people comfortable you have to invite them to be themselves and open to expressing who they are.

Humor is the best anecdote to stress. No restaurant can operate well under a continual state of stress, it’s very wearing. Here we pride ourselves on longevity, on retaining people for many years. Our dining room manager has 5 sons who all work here, another a manager has 2 children who are both working here. That doesn’t happen in a place where the people are not at ease and comfortable.

Jenna Marie Bostock: You’ve been quoted saying the Michelin star is typically a three generation process, so it’s interesting that you have the next generation coming in.

Chef Patrick O’Connell: Well, it is a perfect parallel. Very few American restaurants endure for four decades, but to have risen to this juncture where we are hoping and dreaming and aiming for a third star…it is sped up compared to Europe, where often it is a full and complete generational turn, at least that was the historical pattern. We are very much on that track and very parallel to that approach, and things just take time. It is like planting a tree, you don’t get instant benefits. You wait, patiently.

Jenna Marie Bostock: What was it like to receive those first two stars?

Chef Patrick O’Connell: It was a dream when they first decided to come to the U.S., because I never thought it would actually happen. I was thrilled when they came to NY, I still never dreamt that they would put Washington, D.C. on their program. That was a thrill, but then they announced in the first year they would only be able to include restaurants that were in Washington, D.C. proper and they wouldn’t be able to couldn’t go outside into Virginia or the surrounding suburban areas and I just thought ‘Ugh, after all those years!’

And then they surprised us and made an exception, so that was fabulous. We were the only restaurant included in that first guide that was not in D.C. proper. That was very encouraging.

Jenna Marie Bostock: Are you aiming for a third star eventually?

Chef Patrick O’Connell: It would be a lifelong dream realized. It would be a validation, as well as a minor miracle. Perhaps a major one. One of the second-generation staff members asked me, ‘Chef, would it be a really big deal? What would happen?’ I said ‘Michael, if that ever happened, champagne would be flowing through the streets of Little Washington!’ Hahaha.

We’ll stay focused on it for the next year. At this point it’s a fabulous incentive for us to keep doubling down on our efforts. It’s worked miracles. We’re united in that goal, every single person here knows what it means both personally and for our history. It is probably the only kind of totally close-to-infallible rating service in the world, and certainly one that is internationally respected. It’s the one that I have followed for 50 years, and studied. Like I said, minor miracle. 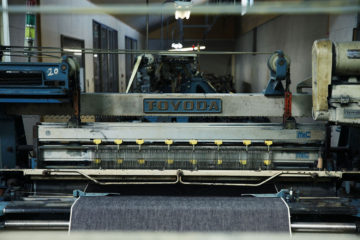