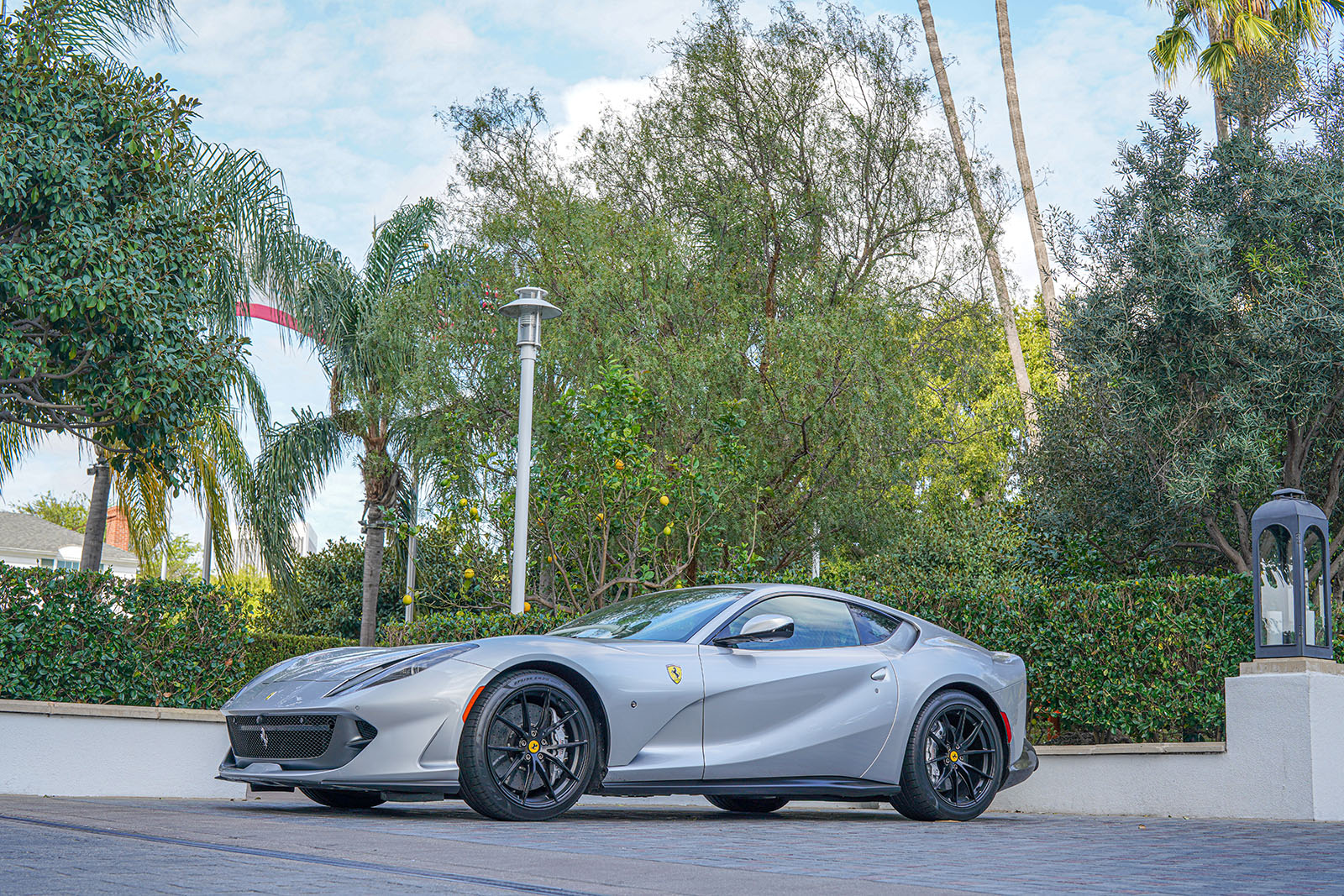 While the 812 Superfast is no longer the fastest production Ferrari ever, having been supplanted by the 950 horsepower electric-hybrid twin-turbo V8 SF90, it still holds the title of the fastest V12 production car Ferrari has ever built. While that may seem like a subtle distinction, I can assure you it is not. As driving exhilaration goes, you simply cannot discount the impact the auditory experience has on the driver, passenger, and lookers-on. Pupils dilate. Adrenaline increases. Heads turn.

I picked up the Ferrari 812 Superfast in Los Angeles a couple weeks back, to test drive while attending a series of motorsports events from Huntington Beach up to North Hollywood.   Despite the infamous traffic of the 405 and surrounding roadways, I was still able to find some stretches of road that welcomed the incredible acceleration and almost seamless shifting of the 812’s 6.5 liter naturally aspirated V12 engine matched to its F1 dual-clutch transaxle.

While the dual-clutch transaxle has received some criticism from other drivers for hard shifts, I found the criticism mostly unwarranted and enjoyed the mild reminder that I was in the cockpit of a 789 horsepower performance machine. The 812 Superfast’s subtle reaction to human input reassures us that the machines haven’t completely taken over, even as technology propels supercars towards performance results often at the expense of the driving experience.

This is a car that deserves to be driven. It pleads for it. It’s 4-wheel steering system creates a virtual short wheelbase that begs for the lateral forces of the canyons.

Although beautiful standing still, its true beauty is accelerating through the peripheral blur of Mulholland Drive while the symphony of the naturally aspirated engine rushes towards you from its mid-front mounted position.

Yes, as you probably already assumed from that wonderfully elongated nose, the 812 Superfast veers away from many of Ferrari’s contemporary designs and revisits its origins with a front mounted engine, with the weight placed just behind the front axle. Reminiscent of Enzo’s original builds, such as the 250GT, the front-mid placement of the engine isn’t just a performance decision. It’s clear the decision was made, at least in part, by aesthetic fundamentalists who aspired to combine both the lines of the original Ferraris with the edges and angles of the Ferraris we see today, on racing circuits like Spa-Francorchamps or Circuit de Monaco.

That aptitude for design flows seamlessly into the dual seat cockpit, where even the passenger has a dedicated screen which displays things like gear position, RPM’s, and g-forces from their leather wrapped seat. As options go, this one is a must.

Other must-have options include Apple Car Play and the Suspension Lift which slightly elevates the nose of the car when leaving steep driveways to avoid the dreaded scraping sound we’ve all experienced at one time or another.

As far as supercars go, the boot of the 812 Superfast is generously sized for a weekend retreat. Having said that, I was coming from a ski trip in Telluride and had some difficulty getting my 110 liter Arcteryx roller duffle to fit. That’s an issue most owners are unlikely to run into, and if you’re investing in an 812 Superfast, you might as well splurge on some perfectly fitted luggage that matches the interior of this beautiful machine.

As optioned this Argento Nurburgring colored Ferrari 812 Superfast with carbon fiber accents, Iroko interior, and Nero carpets, has a sticker price of $416,153. If you don’t require four seats and live somewhere with year round perfect weather like southern California then the 812 Superfast is almost a practical choice for a daily driver. Then again, it’s the fastest naturally aspirated V12 production Ferrari ever built, so who cares about practicality?