Menu
Small businesses can afford to purchase and deploy technologies just as powerful as larger companies can. What's more, they can get up to speed quicker and for a fraction of the cost.

It’s Great to Be Small 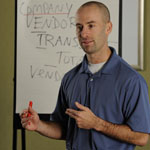 by Phil Simon, author of the The New Small, Why New Systems Fail and The Next Wave of Technologies. A recognized technology expert, he consults companies on how to optimize their use of technology. His contributions have been featured on ZDNet, the American Express Open Forum, ComputerWorld, The New York Times, The Globe and Mail, ReadWriteWeb, abcnews.com, forbes.com, etc. He received a BS in policy and management from Carnegie Mellon University and a masters in industrial and labor relations from Cornell University.

By some accounts, people like me are dinosaurs. You see, Generation Xers remember a simpler time with respect to technology in the workplace. Many of us started our corporate careers in the mid-1990s, the halcyon era from tech stalwarts IBM, Microsoft, Oracle, SAP, and other blue chip tech brands. Sure, they were back office, CRM, and productivity apps designed for the small business. However, those apps were generally less powerful and contained less functionality than the ones used by large companies. In short, small could just not compete with big.

Fast forward to today: the landscape could not be more different. Today more than ever, small businesses can afford to purchase and deploy technologies just as powerful as larger companies can. What’s more, they can get up to speed quicker and for a fraction of the cost.

For small businesses across the board, the days of having to settle for inferior technology have long since passed. Consider CRM for a moment. Many small businesses used apps such as Act or Goldmine back in the day. Yes these are still around, but they’re hardly the only viable options for small businesses. Just off the top of my head, Zoho CRM, NetSuite, Salesforce.com, HighRise are four popular and powerful tools allowing companies to manage their customers, sales, contacts, and leads. Many of these companies allow companies to “rent” software without having to buy it–aka, software as a service (SaaS).

But let’s say that you’re not happy with the existing SaaS and open source alternatives. If you’re so inclined, you can download free software development kits and build whatever you like. This is exactly what RedSeven did. The company then deployed the app in the cloud, allowing its employees to access key data and apps anywhere at any time. Don’t know how to program? No worries. Do what Colin Hickey and his business partner did. When founding PeerPoint, the company outsourced development to a development shop. Using collaborative tools such as Video Skype and basing the core product of off Drupal, the company created a robust product in a fraction of the time and cost that one would have expected even five years ago.

Of course, with all of these choices, it’s easy for one to be intimidated. In large part, that’s why I wrote The New Small. By telling the stories of how companies navigated the sea of available alternatives, I hoped to show that upgrading or modernizing business applications is not rocket science. Companies do it every day. What’s more, based on the freemium model, it’s easier than ever to test drive an app to see if you like it and it makes sense for your little company. This just wasn’t possible back in the day.

Bottom line: If you feel that your company could do more with emerging technologies, you’re probably right. Rest assured that there is simply no reason to suffer with deficient apps and technologies. Those that fight change and cling to antiquated systems and processes are bound to fail behind. Don’t make that mistake.

Charles Darwin said, “It is not the strongest of the species that survives, nor the most intelligent that survives. It is the one that is the most adaptable to change.” He was right. You can fight new technologies or you can embrace it. Companies that do the former risk extinction.