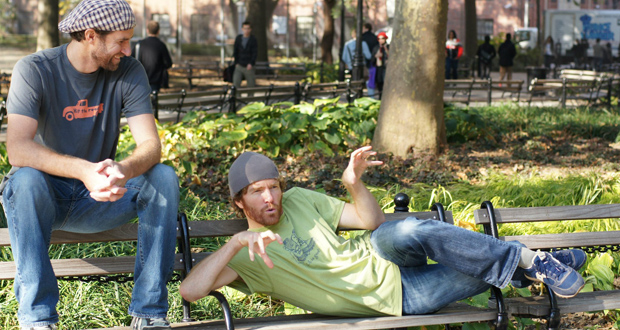 An Interview with the Founders & CEO of Life is good

Twenty two years ago John and Bert Jacobs decided to go into the optimism business and spread the power of positivity through a very simple message…Life is good. Now a $100 million company, we took a walk in the park with these capitalist hippies who haven’t lost sight of who they were when they started Life is good—just two brothers sleeping in a van, selling tee shirts with a message and living the American Dream. Do what you like and like what you do.

Alister & Paine: How was the business born?

Bert: In 1989 we started making tee shirts with our artwork. We hawked shirts in the streets and did road trips up and down the East Coast selling door to door at college dorms.

We were just bouncing ideas off each other and one day our friends were over at our dive apartment in Boston—they saw the drawings of Jake on the wall and said you’ve got to do something with him. We also had a bunch of different slogan possibilities and everyone seemed to gravitate towards Life is Good and this face.

Alister & Paine: How did you eat?

Bert: Sneaking into college cafeterias. We wouldn’t spend more than five dollars on a meal and we wouldn’t ever get a hotel. Mostly we slept in the van.

Alister & Paine: How long until you started paying yourselves a salary?

Bert: We still don’t pay ourselves a salary! You could make an argument that in those days we were profitable because we had no overhead. Our expenses were near nothing. We were shipping out of our kitchen. The first time we paid a salary was when we hired our first employee; we still didn’t have salaries then.

Alister & Paine: Were you officially incorporated by then?

No, we were a DBA called Jacob’s Gallery. When we had Life is good, it was just another design. It wasn’t until ’98 that we incorporated, and when we did that we changed the name to Life is good.

John: People were re-ordering product, which we had never experienced before. We were used to selling maybe a dozen shirts in a whole day but one day in ’94 we just sold everything. 48 shirts, one graphic, one hour, they were gone. It was startling.

Alister & Paine: So in ’98 you made the decision to go with Life is good?

John: We had a lot of conversations about how people seemed inundated with negative information and whether they would embrace something more simple and positive. We hoped they would.

Alister & Paine: Anyone can be talking about your brand or just be saying ‘life is good’!

The number one thing people say to me is ‘Man that is so simple, why didn’t I think of that?’

Bert: It’s not about us and it’s never been about us. The whole idea of over a million Facebook fans is because it’s about them. They feel ownership of it more than us. From a business standpoint it’s extremely effective because there’s a magnetic emotional connection to those three simple words and it’s something that all of culture is starving for.

John: People facing great adversity wrote us letters. ‘Going through chemo my hat helped me stay positive’, or ‘I lost my brother and we had a memorial service wearing your shirt. It helped us celebrate the way he lived his life.’ It was incredibly moving. When we were trying to make the business work we didn’t know what to do with those letters. When we finally got some momentum it led to the first Life is Good festival, and that was our way to thank these people and connect with them and harness the power of the brand.

Alister & Paine: Who does the artwork? Any sibling rivalry?

Bert: Well, I’m better at everything so I would say no rivalry! Haha, but John developed the original style of Life is good and he’s actually always been a better artist. I have very strong opinions about composition, art and design and have a good grip on what’s commercially viable and helping steer the brand, etc. There’s been a fair amount of crossover too.

John: Bert’s a natural leader, he always has been. When you’re this tight with somebody and we believe so much in the mission of the company we’ve constantly talking about creative ammo and creative work.

Alister & Paine: What about company structure and ownership?

Bert: We’re 100% privately owned. We’re a 100M company but we have no interest in belonging to the public or selling the company. As soon as you become public it becomes about dollars per share per quarter. We can get in a small room like the old days and make decisions based as much on the social impact of the organization as on profitability.

I don’t mean to dismiss the profitability, we don’t think we’d be able to help anybody or have our own careers if we weren’t profitable so we have a deep seeded belief that the most powerful entity for social change is a privately held business for profit.

We have a deep seeded belief that the most powerful entity for social change is a privately held business for profit.

If you’re a 501c3 and you’re making money, the government has regulations that tell you exactly what you can and cannot do and exactly what you can pay somebody. If we want to hire somebody to do smart marketing, we could pay them whatever we want. We don’t have to justify it to anybody.

Alister & Paine: Have you felt any pressure from VCs, Angels?

Bert: They used to call a lot more. It’s a short conversation. We’re not against venture capital, but for us, we have our little dream, we’re trying to do something and we think we can grow the organization a lot. The mission can get deprioritized when you go public or sell part of the company, and the mission is everything to us.

John: Jake is who I look to as our inspirational leader. He’s not waiting to someday be happy when he gets a new boat, a promotion, meets that special person. He’s just deciding to be happy today. We have big murals of him in the warehouse and we always say ‘what would Jake do in this situation?’ He knows it doesn’t really matter what clothes your wear or what your status is, it’s about deciding. For most of us, it’s a decision [to be happy today].

Alister & Paine: When you have a tough decision to make do you ever sit back and think about what the guys in the van would do?

Bert & John: Yes. Business is just a tool for you to accomplish whatever you want to accomplish in your life. I don’t care about the clothing business. That’s just a vehicle for a message. We’re just trying to do something special with our lives. That’s the way people have to choose their careers, really think about what you want to do with your life and then find something to use to do that. When you’re old and gray and you’ve spent your one precious life, what will you have spent it on? What would make you happy?