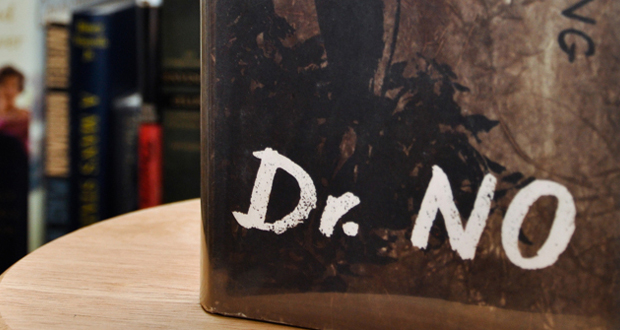 A bookshelf can tell you so much about a person. A quick appraisal can give you insight into someone’s soul, from the well weathered binding of Profiles in Courage to a bright and shiny Harry Potter collection…it’s an intimate way to get to know someone. For Joshua Mann and Sunday Steinkirchner, it goes even beyond a love of literature. Books are their passion, and literally their life.

Eight years ago Sunday and Josh moved to NYC and almost accidentally opened B & B Rare Books out of their living room. Strolling around Manhattan one day they stumbled upon an early edition of Alice and Wonderland and had an epiphany—why not work in a field they both loved? It was a side hobby that turned into a job and eventually a career. Their appointment-only shop still resides in their living room and now holds some of the oldest, rarest books you’ll ever be blessed to open. No reading copies here…one of their prized inventory items is a First Edition Three Volume Set of Jane Austen’s Pride and Prejudice that costs $60,000. To touch the pages induces a chill of excitement and reverence.

B & B Rare Books specializes in 18th-20th century American, British and French Literature, Modern First Editions, Poetry, Mystery and Detective Fiction, Children’s Literature, and Signed and Inscribed Books. But that doesn’t limit their shelves—if you’re looking for something special, they’ll hunt it down for you. This year they helped celebrate the 50th anniversary of the James Bond movie franchise with an Ian Fleming collection that any Bond fan would swoon over.

All the greatest men are maniacs. They are possessed by a mania which drives them forward towards thier goal. The great scientists, the philosophers, the religious leaders – all maniacs. What else but a blind singleness of purpose could have given focus to their genius, would have kept them in the groove of purpose. Mania is as priceless as genius.
– Ian Fleming, Dr. No

Ian Fleming’s novels have been extraordinarily influential since they were first published. Spy fiction as we know it would not have existed without Fleming…he popularized the genre and influenced generation after generation of pop culture icons. What would life be without Bond girls and shaken, not stirred martinis? We don’t want to know.

Dr. No inspired the continuing legacy—it is the sixth Bond book, but the first Fleming novel to be made into a film. Sunday and Josh have a precious first edition, first printing of Dr. No from 1958. The Bond novels have always been highly collectible, especially the true first British editions. These editions preceded US and all other publications, and their pictorial dust jackets are just as iconic as the images from the films they inspired. B & B’s copy has the dancing woman on the front cover, some minor spotting to edges; and is in a very close to fine unclipped jacket with the slightest trace of wear to the extremities. $3,000 and a slice of 007 for your shelf. That’s just about priceless.

There’s something very special about rare books. You hold pieces of the author in your hand—peruse the shelves of B & B Rare Books and you’ll discover an inscription from Einstein, a note from Hemingway to his boat captain, William Shakespeare’s seventh and final quarto edition of Othello.

If you’re looking to impress your boss, renew a contract with that client or just give your fiancée an unforgettable present, take a look at what they’re reading—then visit B & B Rare Books. It will be a gift they never forget.