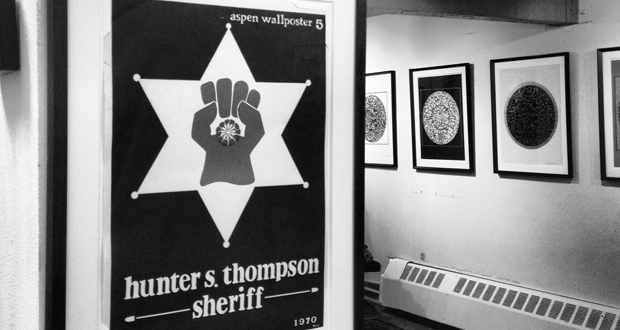 Hunter S. Thompson is one of modern literature’s most colorful provocateurs, an iconic figure even during his life, his persona has taken on near mythological proportions since his death in 2005. His collaborations with silkscreen artist Thomas W. Benton have become artifacts of a time when Aspen was turbulent and America, in general, was unsettled and discontent, its intellectuals seeking an ideal that couldn’t be found in the politics of the era.

To me, the word is the strongest form of art. The graphics are just a vehicle to carry out the words. I would have liked to be a poet. Whenever I do a poster, I try to include a quote, because the words will live there forever.
– Tom Benton

Kindred spirits, Tom and Hunter collaborated to create works of art that reflected the discontent of the early 70s. They were the leaders of Freak Power in the Rockies, or, as they called it, The Aspen Liberation Front. There was much to protest: The Vietnam War, Nixon, nuclear testing, assassinations and environmental destruction. Their work, together and separately, reflected the angst of its time, the pain at seeing things done badly, a sense of helplessness in the face of a seemingly corrupt power system.

Until a few years ago most of these limited edition posters were considered damaged, destroyed, or lost forever. In hiding, these rare posters had never before been collected into one cohesive catalogue until 2009 when Daniel Watkins started piecing together a collection to be showcased in his book Thomas W. Benton Artist|Activist, which recently won the 2011 Colorado Book Award. The book delves into the details of Hunter and Tom’s friendship and showcases some of the lost art from that era. While on the quest for the posters, pamphlets and pieces of art, Daniel started his own collection which grew into the Gonzo Museum.

One of the most iconic images at the Gonzo Gallery includes ‘Thompson for Sheriff’. He ran for Pitkin County Sheriff in 1970, collaborating with Benton on the design of the double-thumbed fist with the peyote button in the center. The fist became the symbol for his lifestyle and political activities in Aspen… it also stirred up a sense of fear and loathing for the political establishment that led to a fiery era of Freak Power politics in Aspen. The Museum has a print of ‘Thompson for Sheriff’, edition 104 of 658, signed by Thomas W. Benton. The print typically costs $10,000 but you can own this piece of American Counterculture history for $7,500 if you mention Alister & Paine.

Hunter S. Thompson was mostly known for his Gonzo style of writing, characterized by a fierce, ruthless and uncensored descriptive voice. That style became famous in his cult classics Hell’s Angels and Fear and Loathing in Las Vegas. Gonzo became the catch word for Hunter S. Thompson as he became an iconic figure in the arts scene of the 70s and 80s and the word Gonzo with the Freak Power fist and a sword became Thompson’s crest of arms, an icon of defiance. One of these silkscreens is also available through the gallery’s website.

Perhaps the most haunting of Benton’s posters is Impeach Nixon with Honor, a swastika ridden skull signed by the artist in 1972 and used as the cover of Hunter S. Thompson’s book Fear and Loathing on the Campaign Trail 72′. This silkscreen print, along with other political and abstract works are on display at the gallery and a limited number are available for sale.

THE BEST MOTORCYCLE GEAR OF 2016

The Gonzo Gallery is currently run out of Benton’s old studio in downtown Aspen. It was a meeting place for intellectuals and activists, an attitude that the Gonzo Gallery has been working to resurrect. Next month, the building will be gutted and the facade returned to Benton’s original design. That renovation means that the Gallery will be searching for a new home in Aspen; in the meantime, The Gonzo Gallery is looking for temporary space on Abbot-Kinney Boulevard in Venice Beach, California and in downtown Austin, Texas.

Through showing the work in Austin and Venice, and eventually finding a permanent home for the Gonzo collection in Aspen, Watkins hopes to preserve the history of the Gonzo era. “It’s really important for people to be able to see and learn from it and ‘get it’. It’s exciting for me to know that in some way shape or form this thing will live on, hopefully longer than me.”