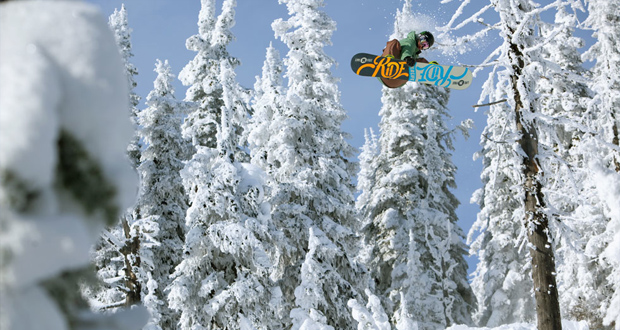 The riding season isn’t over yet. For those suckers who have been stuck inside all winter, it’s just beginning—with fresh powder in Park City and spring skiing in Stowe it’s time to get out of the office and hit the mountain hard.

Ride Snowboards is one of those rare boutique brands that manages to stay true to their roots, keep the laidback snowboard culture and have some of the very best gear on the market (and the mountain). They started with just four boards in the winter of 92/93. With countless adventures under their belt, a true passion for snowboarding and a fierce sense of family the brand continues to thrive with an ever-faithful legion of consumers that will forever be a part of the “Ride family.”

The guys at Ride are driven to continuously innovate in order to make the activity we live for more fun. It’s the ability to come together, as only true friends and family can, and turn something completely mundane into something truly memorable and ridiculously fun. This is true “Ride Style”. On any given weekend (or occasional employee “snow day”) you’ll catch most of the Ride team chasing powder at some of the greatest mountains in the Pacific Northwest.

We took the Ride Machete GT out West for some serious action this season—it lived up to our expectations and then some. Appropriately named, this board can seriously shred the slopes…and backcountry too.

The mountain is your playground on this aggressive, surfy twin snowboard built for hitting features and locking in landings. It rides like a camber board, is awesome at speed and loves hitting jumps. The reverse definitely helps for the pow and makes the board less likely to catch when buttering around.  Ride moved the carbon to the outside edge of the board, maximizing response, grip and stability. The Machete is perfect for going big with an all-around playful feel.  Pair it with some super versatile light-weight Hi-Phy Boots and All Mountain Freestyle Maestro Bindings and you’ll be bombing Corbet’s Couloir in Jackson Hole in no time.

Get your set up right for some end of season spring skiing and be ready for an intense winter in 13/14—you’ll never want to get out of the pow. Check out this awesome brand for yourself at the Ride Shakedown April 5-6 at Mont Saint-Sauveur in Canada. The slopestyle course (including both a big air and a rail component) will see 40 invited professional athletes from far and wide along with 80 promising amateurs battle it out for a total purse of $50,000. On the agenda: a halftime show, snow and skate booths, an autograph session with pros, after partys, live DJs and much more. In other words, an incredible opportunity for thrill-seekers to discover snowboard culture and everything it has to offer.

We asked Ride’s VP of Global Marketing, Scott Mavis, what his favorite part of working for Ride is. “For me, my favorite part of working in the snowboard industry is being able to work with so many like-minded, passionate, and energetic people. At the end of the day, snowboarding is about getting out there on the mountain and having fun with friends and family. And it’s that ‘fun’ aspect that really permeates the entire industry and one that we try to foster on a daily basis.”