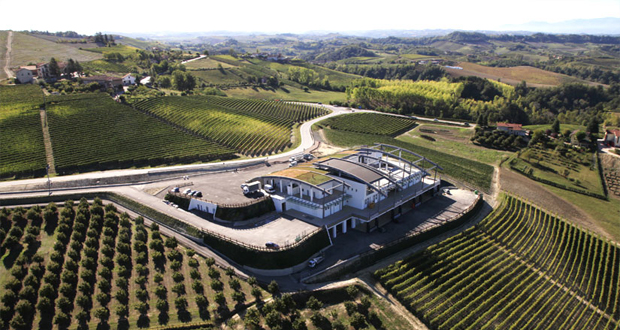 [review] Domenico Clerico wanted to be a vintner for as long as he could remember—his father showed him how to grow grapes when he was a child and eventually asked him to take over his agricultural business. In those days, growing grapes and selling them was not very profitable, so Domenico decided to try his hand at making wine.

As his adventure unfolded, the decision to become a wine producer meant he was faced with the need to increase the amount of land under cultivation, and so in 1977 he bought a small plot in the heart of the “Bussia” district in Italy. “The result was Bricotto Bussia, my first Barolo produced in 1979. Then in 1981 I managed to get hold of a fantastic vineyard on the Ginestre hill in Monforte, from which I produce Ciabot Mentin barolo. In 1990 I bought another piece of land in the same area where I make Pajana barolo, and in 1995 a vineyard situated in an area known as Mosconi, which is where Percristina barolo originates.” – Domenico Clerico

What started as his father’s small grape growing business has now grown into the Domenico Clerico winery, one of the most notable names in the wine world with 21 hectares of vineyards producing a total of around 110,000 bottles a year.

The vineyards are on the border of Langa, where the hills and the purest marl make way for the plains that lead to the Alps. It was here that Domenico was born and grew up, got married and challenged what until then had been the destiny of the grape grower –to produce grapes but not wine. He was different; he looked beyond the Monforte hills and saw there was also a place for wine, not just grapes.

A true innovator in his industry, Domenico believed and invested in vineyards that were perfect for growing grapes for the wines that had long been part of Langa tradition – dolcetto and barbera.

One of Domenico’s most sought after wines is his Barolo, famed as one of Italy’s finest wines. The Barolo is made with nebbiolo grapes, a black-skinned red wine grape variety most famous for creating the ‘tar and roses’ scent of Barolo wines from Piedmont, north-western Italy.

We had the pleasure of tasting the 2008 Domenico Clerico Barolo Ciabot Mentin Barola on a perfect summer’s eve with the sweet scent of charcoal in the air and the warm welcome of summer on our toes. It’s a gorgeous medium red, a perfect balance of light and dark. The tar and rose notes of the nebbiolo grape shine through with a light earthy taste and sweet layers; it’s lush and intoxicating all at once. Each sip floods your palate with flavor and leaves you wanting more.

There’s no need to be a ‘seasonal’ wine drinker. Red is not restricted to cold winter evenings in front of the fire and Chardonnay is not your only choice on a sultry summer day…a lightly chilled glass of 2008 Domenico Clerico Barolo will be everything you long for and more.