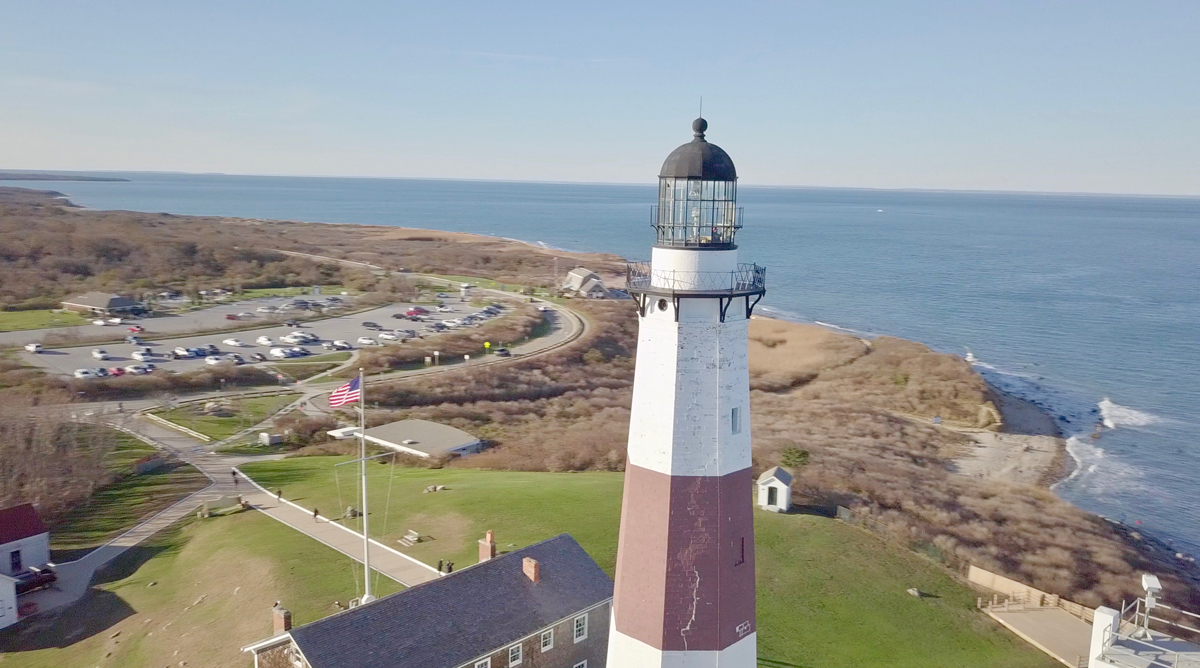 Do You Even Winter in the Hamptons?

Prime seats on the Jitney are just the beginning.

People have this impression that this lovely little stretch of East End Long Island is abandoned come Labor Day Weekend, but it’s a well-kept secret that this gem, this famous South Fork spot that has only a reputation for summertime shenanigans, does not lose its allure come winter.

If anything, it’s enhanced. Come winter there’s the desertion of sunbathers, the soft sand giving way beneath your boots, the brilliant sun on your open face, the spray of ocean in the breeze. The faintest of flurries beginning to fall as you walk to the Grindstone for a homemade pumpkin spice donut and red-eye, the warm satisfaction of a bowl of spicy crab soup at a roadside hut. There’s an indescribable charm you can only feel while walking through Sag Harbor with the salt air filling your lungs, a shearling coat enveloping your body, and that sense of peace that is only ever found when you are so close to the sea.

STAY ON THE WATER AT BARON’S COVE

Start by the bay at an iconic hotel. Baron’s Cove is a vibrant hotspot right on the water that embraces its original 1960’s roots, when it boasted prominent guests like John and Elaine Steinbeck, Paul Newman, Art Garfunkel, Truman Capote, George Plimpton, and Kurt Vonnegut, to name just a few.

Baron’s Cove was the place to be then, and still is today. Walk in on a Friday night and find the bar buzzing and the cocktails flowing while everyone overlooks the stunning view from floor to ceiling glass surrounds. It’s on the harbor but also just a short walk from Main Street, so it has the unique ability to be in the heart of it all and still remain intimate and private.

The Hotel features sixty-seven charming village and harbor facing rooms and suites, and lets you bring the pups along for their weekend at the beach too. The recent top-to-bottom renovation allowed the hotel to focus on keeping their history and charm, while updating to more modern and luxurious amenities.

IN THE MIDDLE OF THE ACTION AT THE AMERICAN HOTEL

Sag Harbor has one of the most famous Main Streets in America. Overflowing with boutiques, galleries, museums, and widely acclaimed restaurants, it’s just a street that beckons to be wandered. Porches overlook sidewalks with welcoming rockers. After a few nights at Baron’s Cove take an evening stroll to the American Hotel, where you’ll be transported to the early 19th century.

When Ted Conklin, the ever-dapper owner and visionary, purchased the hotel in 1972 it was a decrepit boardinghouse and saloon with four outhouses. It had not hosted guests for over four decades. After intense, loving restoration and dedication it’s now a historic landmark and jewel of Sag Harbor.

The hotel is like a living museum—lovingly renovated with extreme respect for its original 1824 roots, and a nod to the genteel eccentricities of a London Dining Club. Only 8 rooms exist, each with its own distinct Victorian feel and luxurious sitting area. The entire feel of the hotel is timeless, sort of the Hamptons’ answer to Rick’s Cafe Americain in “Casablanca” or their version of Manhattan’s Hotel Elysee. There are no television sets anywhere—instead, have a cup of tea in your sitting room and watch the world go by beneath you.

OR FIND YOUR OWN PRIVATE OASIS AT THE BAKER HOUSE 1650

After experiencing some of the action, head to a true country escape in the middle of East Hampton. The breathtaking Baker House 1650 welcomes you with secret garden-esque topiaries. A hush overtakes the car as you venture down the hidden driveway, feeling a whoosh of stress release from your shoulders. The Main House is a picturesque Elizabethan-style property, each of the five guest rooms decorated in intricate lush fabrics, most including a woodburning fireplaces and soaking tub. The Hedges room, where we cozied up, is the epitome of traditional tranquility, a charming space that’s part of the original 1648 house with a terrace overlooking the quiet village green and a roaring bedside fireplace.

The Baker House is technically a Bed & Breakfast, but an experience here feels more like a super luxe boutique hotel. Friendly faces welcome you, as well as a super lovable furry employee, and the atmosphere is incredibly intimate. Spend the afternoon curled up in the sun-drenched window seat with a page turner in hand, have friends over for cocktails in the living room with the crackling fireplace and a round of piano playing. In the morning wander down for delicious breakfast to order and a fresh espresso. It’s the perfect place to relax, unwind, cozy up and enjoy this little hideaway a hundred miles from Manhattan.

When Ted first opened the American Hotel in 1972, he served as his own chef. Today the restaurant is led by the exceptional talents of Executive Chef Jonathan Parker and features creative dishes grounded in the French classical tradition.

The hotel’s wine list is 85 pages long, and there are more than 30,000 bottles beneath the floorboards in the barroom. Wine Spectator has faithfully bestowed its Grand Award on the cellar—it’s one of only 87 restaurants worldwide to receive the honor, and has been awarded the title for the past twenty years. Only nine restaurants in New York State hold this prestigious award and only one on all of Long Island. Of course, we had to taste some 1983 La Mission and 2010 Cristal Champagne while visiting a restaurant with such wine prestige. It did not disappoint.

SIP ON CHAMPAGNE AND SNACK ON WAGYU

Grab a table in the main dining room at Baron’s Cove for panoramic views of the harbor and feast on classic, American fare including local surf and turf, prepared with fresh and local ingredients.

Order a bottle of bubbly and whatever the special is from 7X Ranch and you can’t go wrong. 7X Ranch is premium, all natural Colorado beef that is pure Japanese beef, raised from one single breed with a 100-percent-pure bloodline. The cattle is bred and raised to create the perfect ‘American’ Wagyu steak: toothsome, flavorful, and unbelievably juicy. Baron’s Cove works with 7X and is a delivered a package of whatever the cut of the week is, so it’s always a fantastic surprise for Chef and patrons alike.

It’s imperative that you do not leave Sag Harbor without experiencing Grindstone. It’s even better if you stop by on your first morning, so you know you have time for one more treat on your way out of town. It is the donut shop to end all donut fantasies. This is your crumb covered, double glazed, marshmallow fluff cravings come true. The donut bliss of your dreams. Hot, fresh, brioche dough, dripping with decadence like you’ve never before tasted. Oh, and they have serve some pretty killer Four Barrel coffee too.

Enter the quaint little coffee shop rocking a Williamsburg vibe and gawk at the plethora of edible delights, ignore the sugar alarms going off in your head, and just enjoy. Owner and Chef Kyle Shanahan is the stepson of Iron Chef Michael Symon and opened the restaurant under his guidance a few years ago. It immediately became a staple in town, and a hotspot for the morning crowds. Kyle bakes 1,300 donuts on weekdays, 2,200 donuts on weekends and when they’re gone, they’re gone.