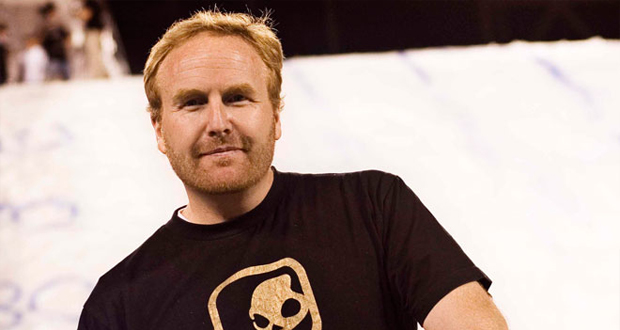 Rick Alden of SkullCandy out-rides the economic avalanche and lets our readers know what he did to survive.  Live and learn.

Listen up.  Ernst & Young named this man Entrepreneur of the Year in 2008.  This year SkullCandy was listed as Number One for Consumer Electronics by Inc. Magazine (Ranked #14 in the Inc. 500 overall).  Did I mention they’ve grown over 6,251% in the past three years?

We caught up with Rick Alden between impromptu business meetings and guest speaking at Weber State University to talk about how he figured out how to make serious money doing exactly what he loves.

Alister & Paine: I see SkullCandy brought in 86 million dollars in revenue last year—expected to hit $120 this year. How did a headphone company based out of Park City do that?

Rick Alden: Haha. We asked ourselves the same thing. We had intended to sell some cool lifestyle headphones to skateboard snowboard type lifestyle shops and we genuinely lucked into a great time in the market.

Fantastic companies like Seinnheiser and Sony that had been selling headphones before us had just been under attending to a very useful, very young new user of headphones focused on the iPod demographic.

Alister & Paine: How do you feel about a third of your profits being taken as taxes after all the blood, sweat and tears that goes into making it?

Rick Alden: Taxes just gut you. On one hand you say, the taxes are going to support both the state and federal government that allows us to be able to do business and to be successful and to create an economy where we can be successful, so you have to grin and bear it a little bit, but still…

Alister & Paine: If you had 24 hours in the Oval Office to do anything, what would it be?

Rick Alden: Whew. I don’t often get asked questions that I’ve never thought about before. One, secure borders. Two, go to a fixed tax program.

Alister & Paine: What’s the best perk of the job?

Rick Alden: When you actually start to scale the business and you’ve got enough money to hire a fantastic team. We have managed to assemble this world class dream team of management across the company. Not only does it make you a bunch of money but it just makes them the coolest people in the world to work with.

Anytime I want to go anywhere in the world I just schedule a meeting in that country and go.

Alister & Paine: We all know how the idea for the SkullCandy headphones came about, trying to answer your cell phone on a ski lift while listening to your iPod—what song were you listening to?

Rick Alden: Oh my goodness! Come on. I have no idea. I was probably listening to either The Grateful Dead or Phish. That’ll probably make a lot of people wonder what kind of guy I am.

Alister & Paine: Is SkullCandy a C-Corp or an S-Corp and what made you decide to go that route?

Rick Alden: Started out S-Corp but when you bring in investors you pretty much need to be C-Corp because as soon as you’re making money the tax effect for investors in the business passes a tax obligation onto the owners of the business.

Alister & Paine: Once you had the idea, what were the preliminary steps to get it going?

Rick Alden: First it was having the time to do it. Then it was finding a factory that could develop the technology—I’m just a dumb snowboarder, not an electrical engineer.

Then it was coming up with the first customers, developing some demand creation, and actually building the product.

Where it got really hard for us was figuring out how to buy large volumes of inventory. We almost had to close the doors because we didn’t have the ability to finance the production of that first major purchase order.

Alister & Paine: How did you raise capital?

Debt is expensive, equity is really expensive if the company is successful, but revenue doesn’t cost you anything. We’ve worked hard and have been reinvesting that money into the business every year.

Alister & Paine: What was your startup strategy?

Rick Alden: We went to Burton Snowboards and we started doing audio beanies with Burton and really unique headphone jackets with Bonfire Snowboard clothing all powered by SkullCandy. We did dozens of these collaborations building audio into other people’s products.

How to Find the Right Candidate

Suddenly we had a dozen fantastic world class companies inside the skateboard snowboard community that were advertising and promoting ‘Powered by SkullCandy’ in their campaigns.

We also gifted headphones to every pro skater, pro snowboarder, pro surfer, pro mountain biker, any super cool athlete, and made sure everyone one of them got free headphones.

Alister & Paine: Where do you find your motivation?

The real motivation for growth right now is the investors. If you’re going to take investors into your business and take their money, you have a real responsibility that you get them a return on their money.

Alister & Paine: There are thousands of hungry entrepreneurs out there. What advice do you have for them?

Rick Alden: Get to market. So many people try and spend so much time trying to perfect a product before they go out and sell it and what they don’t realize is that every year they’re expected to have better product.

There’s always a new version of software because software always gets better because it was never perfect the last time they released it. Cars are never perfect when they release it. That’s why they have the next changing model with all those things improved on it.

Alister & Paine: If you could be any person, dead or alive, who would you want to be—besides yourself?

Rick Alden: I’m going to have to go with Craig Kelly. Do you have any idea who Craig Kelly is?

Alister & Paine: I have a feeling I should.

Rick Alden: No you shouldn’t, because if you did you would live in the small knit world that I live in. Craig Kelly was one of the first and greatest snowboarders that ever lived. He snowboarded in places and with more style than any snowboarder that ever lived in his time. I would love to be able to know the places and the freedom and the amount of creativity and style that he snowboarded with.