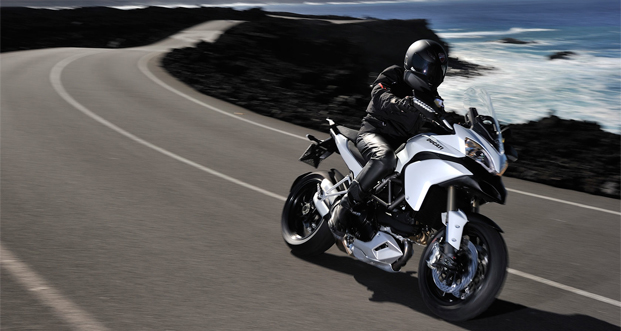 The Ducati Multistrada 1200S is the Megatron of motorcycles; part sport bike, a quarter enduro, a little bit touring, and one-fourth urban make this the end-all be-all of motorcycles.

I picked up the Ducati from the dealership in SoHo Square just a couple blocks from the Holland Tunnel. Immediately, the bike struck me as unique and not at all like one of their urban inspired Monsters or sport tuned Daytonas. For starters, it’s much taller than either and looks like the love child between a European touring bike and a Japanese crotch rocket after bottle feeding on anabolics for six months straight.

The first minute alone with the bike can feel a little overwhelming thanks to the vast array of settings available through the onboard computer, but you quickly get acclimated-if not fully assimilated-with the machine.

After starting up the Multistrada, which greets you with a beautiful symphony of power, you’re prompted to fine tune the bikes suspension and muscle by selecting what type of riding you’ll be doing. Since I was in the city I selected ‘urban’ which reduced my available horsepower to 100 from 150 (more power than my first car had…). Next, I let the computer know there was only one rider-no passenger or saddlebags-and the suspension automatically adjusted itself for optimum handling.

I took off into the stop-and-go traffic of lower Manhattan and made my way towards the Tappanzee Bridge.

On the fly I changed the setting from ‘urban’ to ‘touring’ and the bike transformed immediately-and opened up another fifty horses for me to play with. The ride was exceptionally comfortable and in future rides, with luggage, it became the best touring bike I’d ever ridden. At the moment, though, I was approaching the New York State Thruway and wanted to see what the ‘sport’ setting had to offer.

This Italian beauty has six gears but I was already doing twice the legal speed limit and I was only in fourth. Not wanting to add to my collection of speeding tickets I pulled off at the next service station, topped off the gas, and took a breather.

Fertility Medicine: One Couple’s Journey From Cancer to Expectant Family

As I sat back watching passerbys admire the beast I rode in on it dawned on me that I’d never before experienced a bike that could do it all. I found myself faced with the dilemma of trying to explain the absolute joy of riding such a responsive machine to a pack of fellow bikers. It was like trying to explain the pleasures of a Ménage à trois to a priest… some things just need to be experienced to be appreciated.

Must have accessories for the Ducati Multistrada are the Carbon Fiber Helmet by Joe Rocket ($449), Torrent Sunglasses by Tifosi ($59), and the Nero Skeletal Air Flo Jacket by Alpinestars ($670). Naturally, we’ve tried and tested each of these products and they all rock!