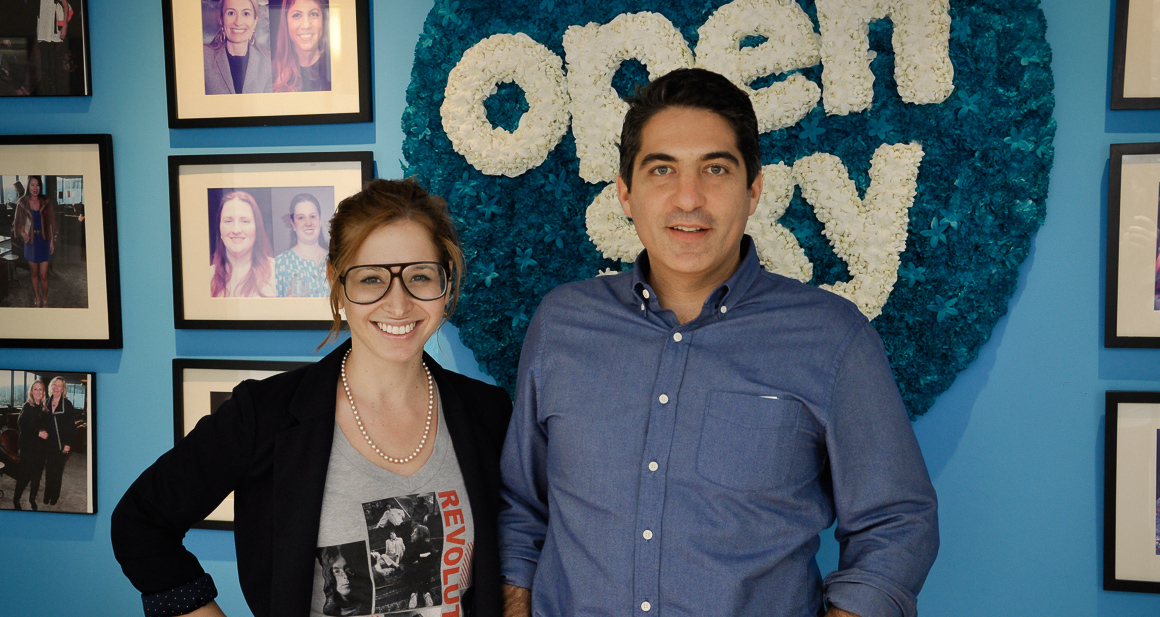 John Caplan, CEO of OpenSky, On Entrepreneurship and Shopping

Never fucking quit. That’s how John Caplan got to where he is today. An innovative game changer who doesn’t believe in playing it safe, John’s enthusiasm for entrepreneurialism is contagious. He’s a master of change…and these days, he’s changing the shopping industry. Before launching OpenSky, a personalized shopping site curated by celebrities, John was the President of About.com and Chief Executive Officer of Ford Models. He helped sell About.com for $500+ million and then rebuilt the Ford Model agency, tripling its size and value.

John launched OpenSky on April 5, 2011—the company now has 2 million members and 33 million connections within the platform. We stopped by OpenSky’s NYC Headquarters to pick John’s brain on entrepreneurship, innovation and prepping a company for mergers and acquisitions.

Alister & Paine: Tell me how OpenSky was started.

John Caplan: One Saturday morning my son really wanted to learn magic. He asked if we could go have a magic day…and I said I would do anything in the world for him, except go to Toys R Us in Times Square. So we Googled a professional magic store and spent hours learning how to do magic from these two magicians. On the subway ride home I said “Wouldn’t the world be a better place if we could buy things with people we trust and love and from people we trust?” That was the idea. Amazon is great but it’s a vending machine of shopping.

Alister & Paine: How do you pick your insiders/experts?

Making shopping about relationships and emotions, not just cheap prices and fast delivery…it felt like a fifteen trillion dollar challenge. I wanted to go after the hardest possible thing.

John Caplan: It’s all about people who are masters. It doesn’t matter how famous people are, it’s about being the best at what they do and having a passion for sharing that craft. Alton Brown just made a video on how to carve a turkey that is the most entertaining thing I’ve ever watched. Here’s a guy who is a master of the kitchen and he’s making you feel like you’re sitting across the table bullshitting with him. Experts are the people you would love to meet and when you meet them you wouldn’t want to walk away because you’re learning so much from them.

In the modern age people don’t actually get to spend Saturday afternoons walking on Bleecker Street anymore. Now you can connect with people you love and go shopping with them. It’s the most exciting thing I’ve ever done.

Alister & Paine: Who came up with the name?

John Caplan: I did. When I turned 40 I told my kids I was going to do my OpenSky project. The official name of the company is The Open Sky Project, which means opportunity to me. There are no limits to what you can do when you set your mind to what you want to accomplish.

Alister & Paine: Where do you draw your daily inspiration?

John Caplan: I’m inspired everyday by the people who are using and loving OpenSky. That might sound like a simple way to answer the question but the idea that our members are connecting with one another and discovering awesome things inspires us to go further and faster.

Alister & Paine: When it came time to launch the company what was your strategy for raising funds?

John Caplan: I wanted to raise money from investors who were entrepreneurs. It was Bob Davis at Highland and Daniel Ciporin at Canaan, both guys who I look up to who understand that building true disruption requires all kinds of creativity and innovation. While they are certainly investors first they have the DNA of an operator and that’s good for a young company as ambitious as ours. We’ve raised $49 million dollars so far.

Alister & Paine: How do you differentiate yourself from competitors like Gilt, Fab, etc.?

John Caplan: Gilt is a great place to buy name brand designer clothes at cheap prices. Fab is similarly awesome as a way to buy quirky design stuff reasonably inexpensively. Both of them are fundamentally discovery of products at cheap prices, basically flash sale businesses. OpenSky is a much different kind of marketplace. We envision a world where everybody on the planet has connections unique to what their interests are and are discovering extraordinary products from people they trust.

Alister & Paine: What advice would you give for setting up a business for a successful merger or acquisition?

John Caplan: I don’t think you can actually run your business thinking about an exit. That’s distracting. People romance the exit. I’ve always enjoyed the building process more than the exit. Every time I’ve sold a business I’ve had sellers remorse. The first step is don’t think about it, the next is make sure you know what the KPI’s are that drive your business so you understand the value you’re creating. Know what you’re really creating at its core and focus like crazy on that.

John Caplan: Never fucking quit. The best advice I could give would be to partner with brilliant people and never quit.