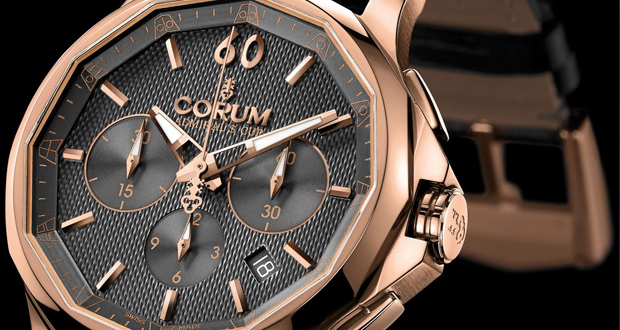 Corum is a legendary brand in the Swiss watchmaking world. Known for style and craftsmanship, the company has been creating masterpiece watches since 1955 in La Chaux-de-Fons. The adventure began with René Bannwart. With his entrepreneurial spirit and watchmaking experience acquired from the most prestigious watch manufacturers, he founded his own brand and created Corum in 1955 with his uncle Gaston Ries. Particularly fascinated by the word ‘quorum’ which means “the minimum number of persons present, required to enable a meeting, to hold discussions and take valid decisions”, he simplified the spelling the rest, as they say, is history.

The emblem, a key pointing skywards, is a symbol of the mystery to be fathomed, the enigma to be resolved, of new territories to be explored, and of innovation. It’s also a nod to the inventiveness, tenacity and bold spirit required in order to attain the total mastery of time…not an easy feat.

In 1960, the first interpretation of the iconic “Admiral’s Cup” model paved the way for Corum’s success. Its history is inextricably bound up with major sailing competitions and prestigious sailors, as well as its inimitable esthetic based on a twelve-sided case, a dial set off by twelve nautical pennants, and the Admiral’s Cup trophy engraved on the caseback. The “Admiral’s Cup” is currently worn and represented by Ben Ainslie, one of the greatest living sailors and a four-time Olympic medal winner who, at the age of just 31, has already earned an impressive number of records and distinctions.

What makes this timepiece so exceptional? A historical heritage, a pure design and, for the first time in this legend line, a more classical design. The classic chronograph reflects a number of the signature codes of the original Admiral’s Cup, united in a harmonious blend of sportiness and elegance.

Throughout the 20th century, the democratization of sport constantly generated new timepieces: from diver’s watches to pilot’s watches, the watch industry developed models that were ever more advanced in terms of both their functions and their technologies. There’s even the sexy Marvin timepiece endorsed by the legendary Sebastien Loeb that we can’t get enough of.

But there’s something special about the sensation and nautical history that comes with the Admiral’s Cup…it’s always radiated a distinctive aura. Since its creation it has been the ultimate Corum sports watch. For over half a century, it has embodied the brand’s tribute to the maritime world and to sailors. The Admiral’s Cup 42 Chronograph runs approx $10,000 and you don’t need to be a sailor or seaman to rock one of these beautiful creations.

This is one of the most emblematic watches of all time—and it goes perfectly with dress blues or a bespoke suit. Disappointing Christmas presents this year? Treat yourself to a timepiece that is truly exceptional.