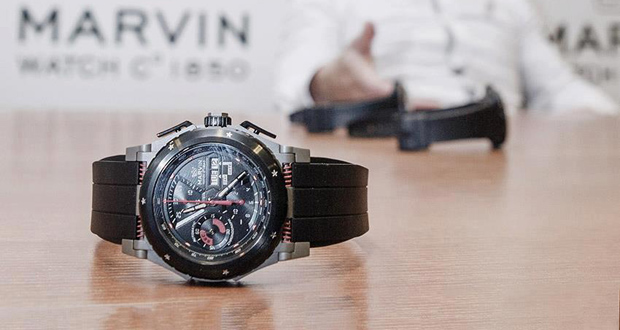 Sébastien Loeb is a racing idol. Accepted as the greatest rally driver of all time, crowned World Champion for the eighth consecutive year (a unique record in the world of motor sport), and latest Marvin Watch Ambassador, the sexy Frenchman has a lot going for him.

To salute Sébastien’s latest major achievement, the luxury Swiss brand Marvin has collaborated with the kickass driver to create two new chronographs: one in an 88-piece ultra-limited worldwide edition, and the other in a collector’s edition. One watch has openworked baton-type hands and yellow hour markers, the other an ultra-limited worldwide edition with the red racing markings. Both are distinctly Sébastien Loeb.

The new Loeb Special Edition evokes the world of rallying down to the smallest details: the flexible horns mounted on spring suspensions colored red, a nod to the critical importance of suspension systems in rally cars, the shaped counters designed like dashboard instruments; the dial composed of riveted plates on different levels; the openwork hands that suggest a rally car’s reinforcing bars.

You can almost hear the screech of the tires on the tarmac-textured dial, and the engine being pushed to the limit on the chronograph counters designed like the dashboards of the speed demons it is modeled after. The exceptional driver’s signature appears at 4 o’clock on the dial of each model.

This collection is a reflection of Marvin’s long-standing passion for cars and racing. In the 1930s the brand launched the “Tyre watch” a pocket watch set inside a rubber tyre. In the 1950s, Pierre Didisheim the great grandson of the brand’s founder, took part in several races, driving a car in the standard Marvin colors. At the 1950 Swiss Grand Prix in Berne he met the famous Argentinean driver Juan-Manuel Fangio who visited the Manufacture four years later with a Marvin watch on his wrist. Racing and watches just seem to go, literally, hand in hand.

This is a timepiece like no other. Seriously sporty with a classic look and unparalleled exclusivity, it’s a fun way to update your look without a stuffy or typical old fashioned dress watch. Definitely not your Grandfather’s timepiece. A watch that conveys the expertise and the originality of a brand, while bearing the hallmark of a true champion.

There are less than 100 of these watches now available…tick tock.