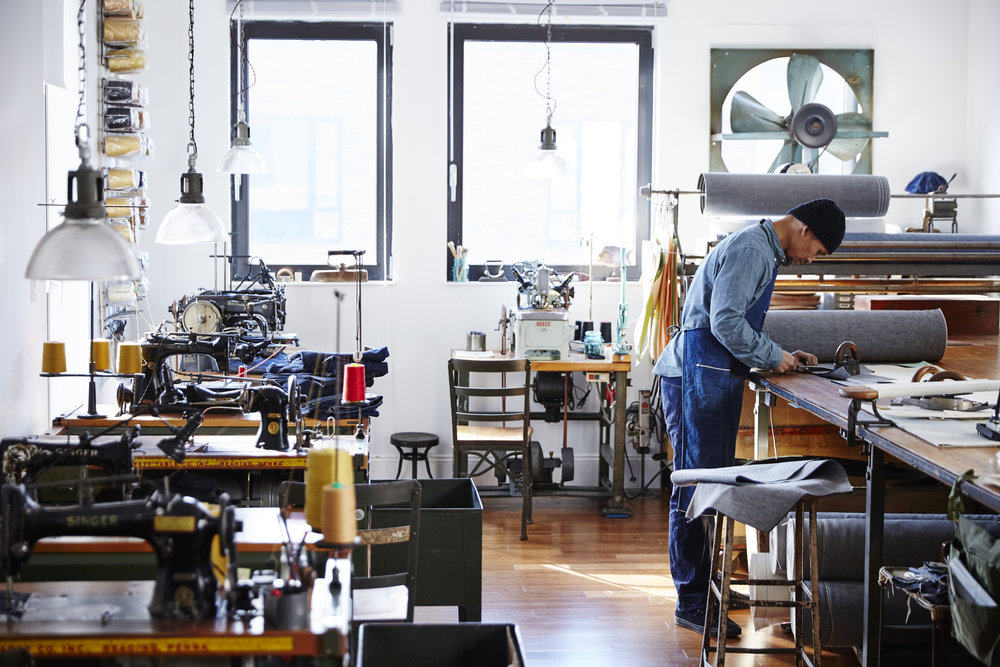 When you hear the word bespoke clothing, the images that usually come to mind involve Italian wool, functional button holes and the world of Savile Row. Why do we strive for perfect fitting three piece suits and settle for ill fitting jeans? Well, there’s one man who has set out to change how we create and wear denim, one pair of jeans at a time.

Takayuki Echigoya is a purveyor of the ‘denim arts’, bringing to the industry a dedication to creating the absolute finest pair of jeans and treating them as wearable pieces of art, as opposed to the disposable replaceable mass produced pieces we tend to purchase on a regular basis.

Takayuki grew up in coastal Wakkanai, on the northern tip of Japan. In 1996, he moved to the Bowery area in New York to start a fashion line. He ultimately took that line to Japan where, in 2013, he learned, by plying Chinese factory workers with sweets, how to sew denim. In 2014, he returned to New York and two years later, he started Bowery Blue Makers. His native country still plays a part in the jeans-making process; Takayuki sends American cotton to Japan to be dyed; then it is returned to him to sew.

It takes Takayuki eight hours to make a single pair of his handmade, vintage-style jeans in his home-factory-showroom in Bedford-Stuyvesant, Brooklyn. To mimic antique jeans, he has collected 11 black Singer sewing machines manufactured in New York between 1905 and 1945, each featuring a steel needle needed for his signature stitches. Another machine once used by Levi Strauss & Co. is used for hems; another for buttonholes. We had the pleasure of going through the custom creation process with Takayuki, and interviewing him about his denim addiction and process along the way, The jeans can sell for anywhere upwards of $1,000 per pair, and it’s as worthwhile as any amount you’ve ever dropped on a custom suit.

As Takayuki says, “They are not garments. They are something else entirely.”

Brian D. Aitken: How did you get started in the denim industry?

Takayuki Echigoya: I don’t know if I’m in the denim industry, but I chose denim that won’t fade as the culmination of my career. It’s been 10 years since I started this project.

Brian D. Aitken: What did you do before creating Bowery Blue Makers?

Takayuki Echigoya: While buying and selling vintage clothes, vintage cars and vintage furniture, I had been working as a designer for men’s casual brand designers and clothing retailers for about 25 years.

I think I like the history of sewing machines and denim more than jeans. I’ve always been interested in everything vintage, from clothes to cars, and vintage sewing machines combine both of those interests. I’m fascinated by how the sewing process has changed over the years. Sewing machines have improved, so sewing speed and accuracy have also improved.

Brian D. Aitken: Can you tell us a little about why you make your denim with rare and vintage sewing machines?

Takayuki Echigoya: I use the same sewing machine as before mass production was invented to express the creation of jeans. I’m not making garments, I’m making artwork, so I try to use my favorite machines.  For example, when traveling by car, going to the destination with the latest 911 and going with the 356 or ’73 911RS are completely different approaches and experiences. With sewing machines it’s the same concept. It takes a whole day to make jeans. I want to enjoy making it anyway. Of course, the mood of the creator affects the work.

Brian D. Aitken: I heard a rumor you were working with a factory in Japan to make your denim as close to what denim was like in the 1880’s. Is that true? Can you tell me more about that?

Takayuki Echigoya: What I wanted to make was jeans with a handmade sense before mass production came along. When I was working as a designer for a men’s casual brand, I tried making them at denim factories in North Carolina and Okayama in Japan, but I couldn’t make what I wanted, because it was an industrial product by the division of labor using the latest sewing machine. Also, the sewing machine operators don’t know anything about vintage jeans.

To study jeans sewing and denim fabrics, I quit all my work and went to the denim mecca Okayama to work as an apprentice at the Evisu jeans factory for one and half year, no salary.

Brian D. Aitken: Your denim is incredibly difficult to come by. How can our readers go about getting a pair of your jeans?

That’s not true. I take orders online only on the 10th of every month and I open a few fitting appointments every month so that the leading time of shipping my jeans does not exceed more than 3 months.  Every December thru February will be a holiday of my fingers as I go on a trip to study denim and sewing machines.

Brian D. Aitken: What should people look for in a pair of selvedge jeans?

I believe that it’s a good idea to choose RAW denim that has hair growth, not burned. Sanforize denim (shrink-proof processing) is not as great fading as RAW. And if you can see and touch the fabric, make sure that you are using non-uniform threads even in RAW and that the surface is rough (weaving tension is weak).

Is it vintage or new? If it’s new, is it handmade or factory-made? Jeans are like pottery, paintings, or furniture. The value of factory-made pottery and handmade pottery, posters and counterfeit works, and original paintings are different. The same concept applies to jeans as well.

For jeans that you can wear for a long time and enjoy aging, it is a good idea to choose jeans that are valuable to you.

In Big Data We Hope and Distrust

Brian D. Aitken: On that topic, there seems to be some controversy on how to care for selvedge. What’s your take on this? How do you tell your customers to care for your denim?

I think it tends to complicate things like wine and coffee brands do to make more sales. They can fool users as it’s hard to get an answer.

There is no doubt that the current great RAW selvedge denim will have a good fading if it is shaped and dried in the shade after washing, so I tell my customer to do that. Of course, it’s best not to wash, but jeans that smell aren’t desirable either.

Brian D. Aitken: What does the future look like for Bowery Blue Makers?

As far as I know, no one else sews jeans on Singer’s early industrial sewing machines. It is also the exact same type of sewing machine that Levi’s actually used before mass production.

It makes sense to use a sewing machine from the time period you wish to evoke, but no one else seems to have arrived at that thought point yet. You must be very lucky to get a sewing machine that can be actually sewable from that era. Also, people don’t typically have the opportunity to actually touch and see the jeans of that time.

It’s not easy to sew jeans with that the oldest sewing machine that has ever been successfully introduced for manufacturing purposes. Compared to sewing jeans using a sewing machine in the early 1900s, it takes more than twice as long because the sewing speed is slow and the thread tension system of the sewing machine is primitive and difficult to adjust and control. Also, at that time, the thickness of denim was only 9oz, I use12oz denim because 9 oz is too thin for clients.

I also would love to collaborate with Levi’s. That is a dream of mine.