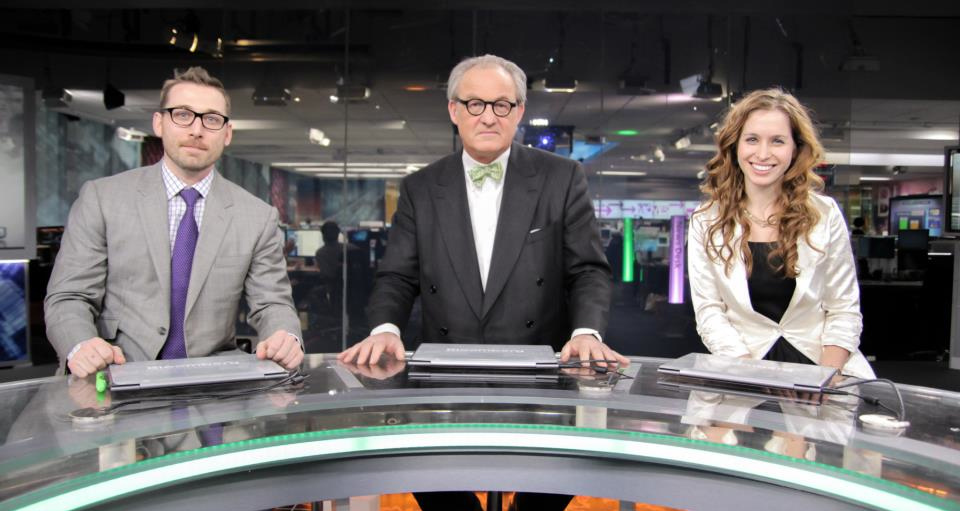 You might know him as the well-spoken bow-tie-wearing silver fox on your television screen every morning. We know him as Tom Keene, editor-at-large at Bloomberg News, host on Bloomberg Radio and host of “Bloomberg Surveillance.” Tom is an economic scholar, providing economic and investment perspective to Bloomberg Television while interviewing some of the most intelligent people in the world.

We stole Tom for an hour in the Bloomberg conference room of ‘East Berlin’ to discuss America’s economy, his favorite cocktail (Beefeater shaken with olives), his upcoming trip to Davos and how to properly tie a bow tie.

Alister & Paine: How did you get your start at Bloomberg?

Tom Keene: After 9/11 my investment business got incredibly slow. So I called Bloomberg up looking for a job, they invited me in and said you have to work with Matt Winkler in news. We walked over to see Matt Winkler with no appointment, we talked a bit and he said come back tomorrow. I came back there next day, we walked into a meeting he said this is Tom Keene our new Head of Global Strategy. That’s Bloomberg.

Alister & Paine: What’s changed since you came on board 10 years ago?

Tom Keene: We’ve seen three slowdowns and the company adapts to that. Our hallmark is we listen to our clients. They’re hurting right now, it’s challenging out there in finance. We’re listening especially hard to them about what they need and what they don’t. It will be a very exciting 2013 for us bringing out new things on the terminal. What we need to do in our world of news, TV, radio and print is also adapt to the changes that are going on within the media and bring that over to the terminal customer.

Tom Keene: Hilarious. I just joined Bloomberg and it’s a miserable day in Chicago. We lined up Milton Friedman and Robert Lucas back to back. I’m on the phone with Milton Friedman and he drops the phone in the middle of the interview and just keeps on talking. He’s literally down reaching for the phone knocking it against the table still talking…that’s just what 92-year-olds do.

Alister & Paine: I heard you never take a day off and work 80 hour weeks. What’s your advice to follow your passion and be able to do what you love?

Tom Keene: I hate the word passion with a passion. You have to have an understanding of the smartness and capabilities and skillsets of the competition and the people you emulate. One of the great failures of modern education is they don’t explain how smart these economists and politicians are. You have to really have an understanding of who your competition is, what their qualities are, and how you’re going to compete in that milieu.

Alister & Paine: What would be a solution for unemployment in the private sector?

Tom Keene: John Edwards was right, this is Two Americas. We have a hyper successful elite America across all pay scales that is achieving, that is doing well, is doing all the best practices that you and I want. We have another American that is not participating. It’s fundamental issue that’s got to be addressed. Within that there’s a big debate about public policy and what should be done and what should not be done.

Alister & Paine: What do you think should or shouldn’t be done?

Tom Keene: What should not be done is to do the same old prescriptions of the past. Because of globalism we’ve got to come up with some original calculation to drive the unemployment rate lower and at the same time, keep it there. We need some original thinking here. We just can’t fall back on the formulas of 10 years or 40 years ago, it’s just not going to work.

Alister & Paine: What do you think will happen if Congress raises the debt ceiling?

Tom Keene: We know for certain they’ve raised it before and I would suggest nothing happened. The world didn’t come to an end. I will leave it to others to comment on the likelihood of them not raising the debt ceiling, but I would say that history suggests they will and the world will not come to an end. I can guarantee that it will be an ugly process. It’s great because it keeps me employed, that’s the best part.

Alister & Paine: Do you see the American economy ever getting as bad the European economies are right now?

Tom Keene: No. There is an American exceptionalism. It is irresponsible to compare the economic slowdown we’ve seen with the Depression. It’s also irresponsible to compare America with the good country of Greece. There is something unique about America. We clear markets. We are different than the Old World. We are different than Asia. We have our faults but we clear markets.

Alister & Paine: Tell me about Davos this week.

Tom Keene: It’s a curiosity to a lot of people. Davos is truly in the middle of nowhere. You go into the valley and you will have thousands of CEOs, elites, politicians, a sprinkling of entertainment people and the media getting together for the World Economic Forum. There are things to criticize about the plutocracy and the elites gathering at a cushy ski resort in southeastern Switzerland. On the other side of it, it’s a fabulously efficient way to get together with really smart people across a wide set of zeitgeist or behaviors or business and compress into three or four days what really smart people think. You do it within a formal environment such as panels and you do it in an informal environment such as a piano bar.

Alister & Paine: Do you expect a heated Bilderberg kind of environment?

Tom Keene: We don’t know. Last year Occupy Davos was out front and the final meeting of Davos was really difficult, a lot of tension. I did not attend. I don’t know what we will see at Davos this year, two years ago it was Davos of our Discontent and last year it was Dithering Davos. It’s a real mystery what we’re going to see there this year. There is real crisis fatigue, it’s dramatically changed in five years.

Alister & Paine: What do you think about Facebook recent announcement about Bing and how they’re trying to take on Google?

Tom Keene: Technological progress, which is what I use in place of the overused word innovation, involves jump conditions but it also involves putting out a product and then listening to the customers and enhancing the product. Facebook has clearly proven they can do that. Google has also proven they can do that. I agree with the interviews I’ve had that we’ve seen this announcement, which is not a jump condition, and we can dismiss it at first glance but we do so at our peril observing the enhancements that could come for social graphing. It’s what America is about and it’s important to understand this comes out of America. It’s about the courage to fail.

Alister & Paine: What’s up with the bowties?

Tom Keene: I started wearing them off and on and it became signature. This is Hermes which is all I wear. The trick is you do the loop, and the left end has to be longer, that’s the absolute secret. Then you tie it just so. Just go with it.