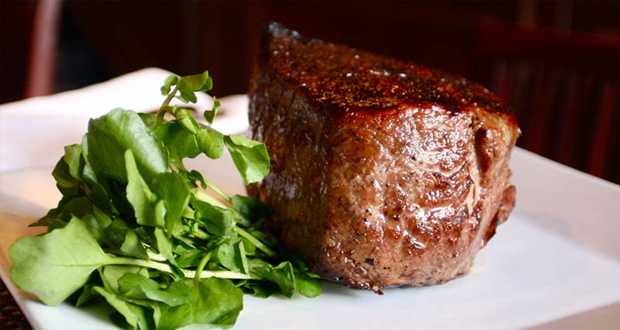 Step back into 1868. The meatpacking district was exclusively for butchers, there were well dressed gentlemen in suits and there was a little bar with six tables that served steaks of such magnitude that people would wait hours and hours for one bite.

That magical combination of old world charm and modern New York City steakhouse exists in the form of the Old Homestead Steakhouse, a generational family run restaurant that has been serving the finest cuts of beef in New York City for over a century– making it one of the longest continually serving restaurants in America. The restaurant has been in the same family for nearly seven decades, currently owned and operated by brothers Greg and Marc Sherry, whose paternal grandfather, Harry Sherry, purchased the establishment in the 1940’s. They may have expanded their table space but they haven’t changed much and the atmosphere is just as intimate and inviting as it was back then.

This Meat Mecca has fed everyone from U.S. Presidents (as far back as Andrew Johnson and Abraham Lincoln), to an A-List of celebrities in movies, television, sports and entertainment (find Will Ferrell or Sofia Vergara here on any given Friday night). They know what they do best and they don’t try to change themselves to stay ‘current’ or ‘trendy’. We talked to Marc Sherry about separating themselves from the competition and continuing to thrive in the dog eat dog world that is the restaurant business.

“We’ve seen so much through the years and the one thing that keeps us going and keeps us current is that we never try to change what we do. We do the same thing year after year—because it works. We buy all USDA prime beef, dry age on premise, butcher on premise and just go from there. We never ever change that. We’ll raise prices but we’ll never cut corners.”

We specialize in food from the four food groups. Beef, beef, beef and beef. – Marc Sherry

The meatpacking district really was just for meatpackers 20, 30 years ago—Old Homestead has relationship with butchers that go back two centuries. That means they always have the first pick of the finest meats…which translates to you having the finest bite of steak on your fork.

This is not your typical steakhouse.  The menu here is an epic list of everything from a raw bar tower (which could stand as a meal on its own) to the out of this world 19 oz. On-the-Bone Prime Filet Mignon to a huge Peppered Slab Bacon Burger. Big is better here–everything is huge, delicious, and incredibly satisfying.

No shame in asking the waiter to wrap up that Porterhouse Steak for Two…this restaurant literally invented the doggie bag. These colossal proportions are the reason that phrase even exists and they are damn proud of it. Marc told us “If we’re charging $50 for a steak and $10 for a side portion it’s got to be a great meal. You probably can’t finish it all. We’re glad when you take it home. It’s not frowned upon here.”

There is no way you can leave this cozy, intimate steakhouse not feeling 100% satisfied. The service is some of the very best in the city, every menu item is perfection and the inviting ambiance makes you linger just a little longer than necessary.