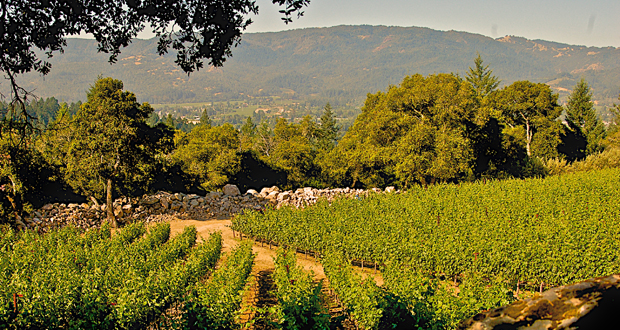 [review]Pinot Noir is classic wine. Plenty of passable but not particularly memorable bottles exist in the world—the Rossi-Wallace 2011 Napa Valley Pinot Noir is not one of them. A striking bottle from a truly boutique winery in Napa Valley, this Pinot stays with you long after the last sip.

Cheryl Emmolo and Ric Forman were already wine making experts when they fell in love and married in 2005. Ric owned Forman Vineyard, focusing on Cabernet & Chardonnay and Cheryl owned Emmolo, focusing on Merlot and Sauvignon Blanc. Their literal love child came in the form of Rossi-Wallace Winery, a tribute to their love of Pinot Noir and their roots (pun intended). The winery was named after Ric’s mother Roz Wallace and Cheryl’s mother Annie Rossi.

With the name of the new label in honor of their spirited (and red-headed) mothers Cheryl and Ric set out to create a really great Pinot, and they did just that. We had a chance to taste a few bottles and pick Ric and Cheryl’s brain about how they make the magic happen. It’s the perfect (personal and professional) marriage—Ric Forman knows winemaking. Cheryl Emmolo knows rootstock. They both know the land, how to cultivate it and how to patiently let it alone. And they both have a rich history in the Napa Valley.

We asked Ric what his philosophy at the vineyard is. “Small vines make fine wine! Mountain grown fruit, tended for high-quality i.e. small crops with meticulously maintained canopies.” He approaches winemaking with a classical attitude. He told us about the early days. “I was initially trained at UC Davis with enology and viticulture but shortly afterwards I spent time in Burgundy and Bordeaux and dedicated the rest of my career to producing wine in the classical European-style. Introduction of barrel fermentation, small fermentation lots & many new varieties were some of my early achievements in the beginning years of my career.”

It makes sense that this 2011 Pinot Noir is one created out of love, since it is a seriously seductive wine. The Rossi-Wallace vineyard is at an unusually high altitude with very sparse, well-drained soil, making for a very different sort of wine. The Vintage 2011 was problematic for late-ripening varieties but for the early ripening varieties it proved VERY successful. With the violet color, sparkling clarity and an intense nose of pure Pinot, it’s just a superb bottle. There are nuances of cherry, cranberry and that “just elusive” Pinot fruit that seduces you and makes you want to forget the rest of the day and pop open a second bottle. Cheryl and Ric both agree that “We like elegant, structured wines rather than those big blockbusters, wines that are intriguing rather than overwhelming.”

Uncommonly Good Dining at The Common Man in Warren, Vermont

The inspiration at the vineyard really comes from the expertise of Ric and Cheryl’s successful Napa careers along with Ric’s early days studying wine production in Europe and the magnificent soils and climate that they process here in the Napa Valley.

Ric and Cheryl come from a long legacy of winemakers and oenophiles who taught them an appreciation for the land and bonded them in mutual nature-inspired joy. That love and legacy comes together today for a sparkling Pinot Noir and a great story to tell the grandkids.