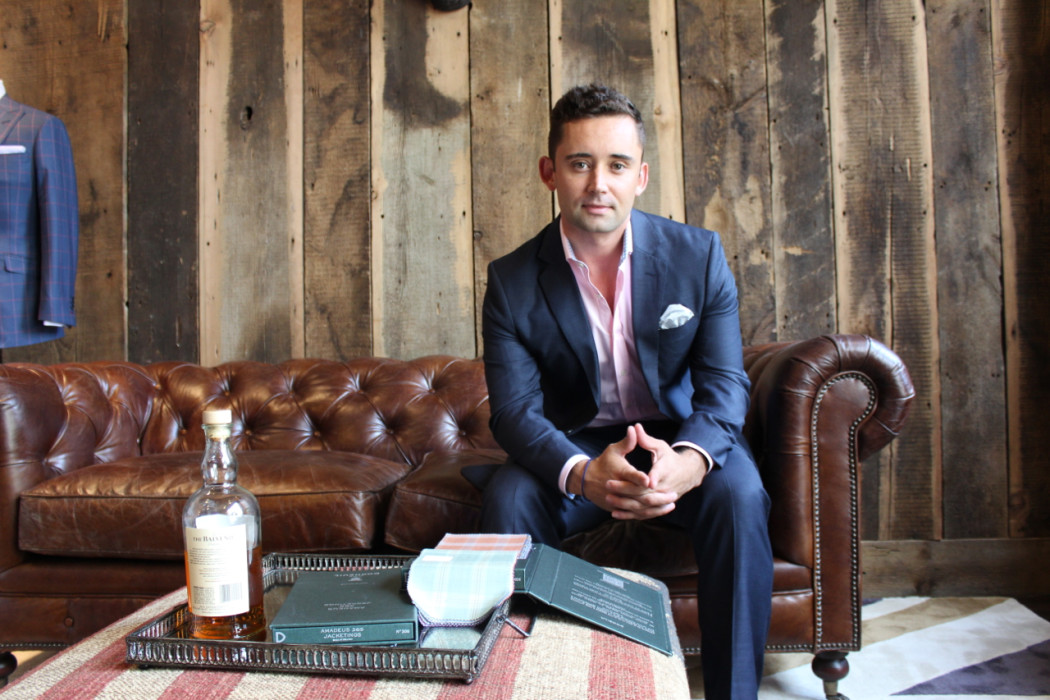 The kings of the menswear revolution, Colin Hunter and Peyton Jenkins, have taken down the overpriced retailers of Fifth Avenue and found a way for men to buy impeccable custom suits made with impeccable fabrics…at a reasonable cost.

Best friends in college, these guys found themselves working up the ladder in their respective financial industries..and they were in need of nicer suits than they could afford.

The rebellion began and the revolution commenced. Alton Lane was born. No more middleman, no more pushy salesmen, and no more having to compromise style or integrity for a lower price tag. Peyton and Colin sat down with me from their small but posh New York showroom to tell me how they’re changing the face of bespoke menswear forever.

Alister & Paine: How did you become partners?

Peyton: Colin and I met the first day of college and have been best friends ever since.  About three years ago Colin met and became friends with our third co-founder, Mana. He’s born and raised in Thailand, and his family has strong ties into the tailoring world, going back generations. Through months of discussions, they realized there was an opportunity to use these connections to form strategic partnership overseas.

Then Colin called me and said ‘There’s an opportunity here. Get ready to leave your job.’

Alister & Paine: Tell me where the idea came from.

Peyton: As we were getting promoted in our separate industries, the need to stay relevant in how we dressed became more real. We saw this gaping hole in the market for attainable luxury for premium clothes at a better fit and at a better price.

We realized we could take the premium brand prices and cut them in half, through a direct to consumer model where we were smarter in fabric sourcing and the inventories that we held.

We recognized what was happening in the economy and realized now was the best time to launch Alton Lane. The mentality of luxury at any cost has gone out of the window.

Colin: It doesn’t make sense for companies to have the massive Fifth Avenue storefront anymore. As a consumer, what I care about is having high quality and a great fit behind a brand I can trust…but I don’t care about whether a company has six thousand employees or ten.

A lot of guys don’t like to shop. We like privacy, and being able to shop without nine sales people circling you waiting for a commission. It’s a very relaxed, private environment where you can take your time and have that one-on-one attention that customers miss in the marketplace.

Peyton: We are timelessly modern, creating pieces and cuts that would look just as sharp on Fred Astaire as they do on the thirty year old investment banker today. Trends are important to follow as they guide fashion from the runway to the department stores to tailors like us, but the classic pieces are here to stay.

Colin: James Bond always has the right clothes on without feeling forced. Everything is impeccably cut, but it’s not a distraction.

Alister & Paine: What about the economy?

Peyton: The need for self presentation has only increased in the workplace. If you have a job, you want to keep it. If you don’t have a job, you’re now competing against fifty other people for the job you want, instead of three.

Now is the Best Time to Grow Your Small Business

One of the challenges in the retail space is that a lot of the value players have only focused on one part of the equation, which is price. We haven’t seen a lot of people out there that have been able to do what we’re doing.

Alister & Paine: How do you plan to keep overhead low?

Peyton: We’re not purchasing 10,000 suits and hoping we sell them. Everything is custom. That allows us to control our cost fair. Intermediating the market helps us bring the price down.

Colin: We’ll also take lower margins than a lot of companies out there because we want to build a loyal customer base. It’s a matter of making a name for ourselves in the market and getting people in our clothes. Having them join the revolution.

Alister & Paine: What’s in the future for Alton Lane?

We have created one place that has quality you can trust with a premium product that is custom made for you. A lot of the people that we reached out to, that’s exactly what their looking for.

Alister & Paine: What’s the best perk of the job?

Peyton & Colin: We’re better dressed than we ever have been.