A Guide to Timeless Fashion 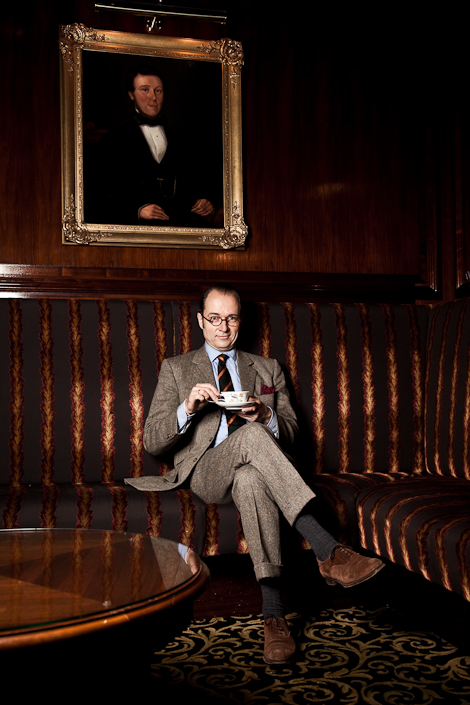 A few years ago a friend of mine decided to make his daily dressing life easier. He ordered five suits of the identical grey sharkskin cloth at Anderson & Sheppard’s in London. Then he had 30 shirts made of mid blue oxford, bought two dozen pairs of black knee length socks of fine wool and five pairs of black oxfords.

He kept all his ties, because they always match no matter which pattern or color they are. He never regretted the rather radical step because he has gained freedoom and, most importantly, time. Even his marriage has improved.

Each morning he opens the drawer where he keeps his socks, gets out two of them (no need to find a pair), grabs a suit, a shirt, any tie, and gets dressed in complete darkness without ever waking his wife.

I like the concept—but I think I would get bored soon by this sort of extreme minimalism. Nevertheless, I do a similar thing on a slightly larger scale. I think that a gentleman can cover every type of formal occasion with ten or twelve custom tailored outfits.

One navy suit, one mid gray suit, one glenplaid suit, one light grey summer suit, one cotton suit, one tuxedo, one morning coat, one tweed suit, two sports jackets plus flannel pants. Add three or four different casual pants, some sweaters and polos shirts and a windbreaker and you’ ll be fine for casual settings as well.

At 43 I very often notice that I‘ve owned items in my wardrobe for 20 years now. And I’m not talking of genres like blazers or grey flannels but single garments that have been used for so long. This may seem very strange to some people but to disciples of timeless fashion it’s normal.

For instance, there is my waxed jacket of English origin which has been overhauled twice in the factory since I bought it in 1983. It looks a bit shabby, but that is no reason to replace it. Or the blue double breasted Chester Barrie suit that I bought as student in 1988 after saving money for a long time. It’s a bit tighter around the waist now…but it still fits.

It may not be everybody’s cup of tea to wear the same things for so many years. Still, it’s a good idea to think ahead when you shop for clothes, especially if they are handmade and custom for you. It may be funny to choose a multiple stripe of green, pink and yellow on a navy worsted but its wiser to pick the white rope stripe because it will go with so many more shirts and ties.

I remember seeing some suits and shirts that used to belong to the Duke of Windsor. Most of the suits had been in use for at least twenty years and you could tell by the amount of repair work that had gone into them that they were not worn occasionally. What amazed me most were the shirts. Almost all of them had a big piece of cloth taken out of the tail to make new collars and cuffs. The Duke of Windsor, who is considered an icon of elegance, didn’t mind wearing shirts with a huge patch on their lower end if this saved him from parting with a shirt he loved!

Just think of him the next time your wife tells you that you must get rid of that old cardigan that you bought on your first visit to London in 1986. Clothes are like friends. You don’t need too many of them. But they have to be good.