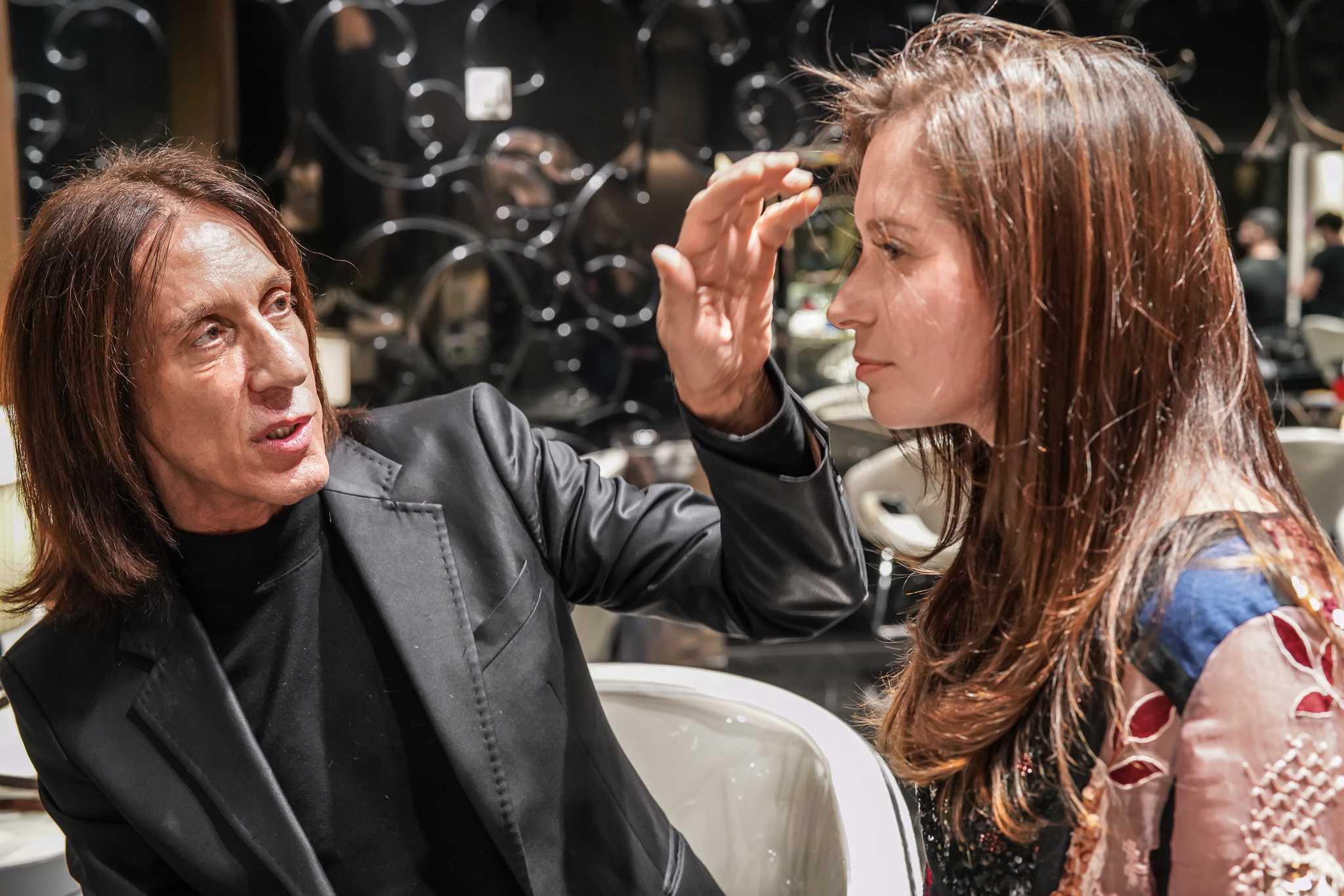 A Haircut and Q&A with The Real Life Edward Scissorhands

Have you ever thought of a haircut as an otherwordly, out-of-body experience? Have you ever felt shears surround your ears and feel like you were on stage at a rock concert? If you haven’t, it’s simply because you haven’t met hair icon and serial entrepreneur Edward Tricomi.

He’s a legend in the world of modern day pop culture, and also the founder of several high profile salons from Tokyo to NYC. Walk into any Warren-Tricomi salon and you’ll be greeted by a space that feels more like a stage than a hair salon. We popped into the unexpectedly edgy salon tucked away within the old New York glam that is the Plaza Hotel, catering to a cool-meets-elite clientele.

The space juxtaposes a rock-star staff with a chandelier-adorned décor, allowing clients to feel pampered but not too far from their creative roots, while blasting The Waitresses and Jimi Hendrix with a little Joy Division to mellow it all out. Poinsettias line the stairs and Ian Curtis croons.

It’s a very dramatic and inviting scene, one that I enter into with excitement and a touch of trepidation as everyone hears I’ve booked a cut with Edward. “You’re having an Edward cut? It’s an experience, you’ll see,” they all whisper as they wash, scrub, paint, brush and prepare my hair for him. I see a silky mane and a bespoke blazer approach, and I begin to learn about this man behind the curtain, the artist, if you will.

Edward has always had a flair for drama, sneaking into The Apollo as a kid growing up in Brooklyn and yearning for the spotlight someday. He watched the greats—James Brown, Chuck Barry. It was his church. He started playing bass in a band out of his Brooklyn garage, then mastered the seven-string guitar and harmonica, becoming a truly talented musician in his own right. He had dreams of aspiring to the stage, and while it’s an unconventional musician’s stage, that is exactly where he has landed.

He started cutting hair as a teen at his sister’s shop, “because the money was good and the women were pretty.” He earned a little extra money and focused on his music, and then as his stylist career took off he found himself on a path that fused musical and stylistic acument.

One fateful afternoon the current Editor of Vogue, Polly Mellen, came into his salon for a haircut, and a star was born. Suddenly Edward, 20 years old, was working at Vogue and becoming one with the American pop culture that was dominating the fashion industry. He met Mick Jagger and Keith Richards, gave them some badass looking haircuts and became THE guy. The stylist, the hair dresser, the rocker, all in one. He still hangs with the Stones and is responsible for their cuts all these years later—he was just backstage at the iconic MetLife concert this summer.

Working with Vogue, Tricomi says, gave him “this incredible training on how to build sets” and create an atmosphere of beauty and luxury. Later, he transferred this knowledge to his salons. “All my salons are heavily curated. It’s sight, smell, touch, sound…We create an environment that’s very conducive for beauty and fashion. Warren Tricomi is more than a beauty brand, it’s also a lifestyle brand,” he says.

A master stylist with bonafide rock star cred, Edward takes his passion for rock and roll and incorporates that into his hair cutting technique. It’s so far from the typical salon experience of sitting and patiently feeling each strand cut gently and smoothly—Edward assesses you for a moment and then transcends into his ‘performance.’

Suddenly hair is flying everywhere and there’s a snow flurry of follicles in the air. An elaborate beat pulses through the air and everything seems to disappear as you let yourself indulge in the experience, being enveloped in the experience. He finishes with a wry remark, steps back, and you gasp at the perfection. It’s not just about the hair. It’s an intense emotional connection to the cut and the result, the participation in this ‘performance’, this role you’ve played in how you display yourself to the world.

Already enamored with this hair god, I ask about the famous Tim Burton connection.

It’s a little known secret among those in the know that Edward Tricomi was the actual inspiration for Tim Burton’s beloved cult classic, Edward Scissorhands.

Edward tells me, “Back in the late 80’s I had just invented this technique called abstract layers. I was helping to put on a show that raised money for an AIDS Foundation and everyone got to do something on stage, they all brought out nine models and had lots of hoopla. I went out with just one girl, just one, and got the music going and began to cut her hair to the rhythm of a track I had cut myself. The crowd went wild. The press got ahold of it and loved it.


Making the Platform Economy Big and Hard to Miss

“We had strobe lights going, it looked like it was in slow motion. It was performance art.

You could see hair flickering in the air, coming down, all in perfect timing to the music. Tim Burton saw that performance live and that year, Edward Scissorhands was written.”

A humble shrug and he drags a pair of scissors drastically down the side of my face. He sees my horror and assures me it’s not a slash style cut, it’s just the process. True to his word, when I’m finally unveiled I feel like me, but a much edgier, cooler version of me. This me only exists in the heartbeat of the Plaza, with this pop culture icon and his Brooklyn accent spewing advice I can barely keep up with, playing me videos of him slaying the seven-string guitar while Russian rock blares at us. This me glows from the inside, and feels really beautiful.

I ask him for a final piece of entrepreneurial advice as he sends me and my new locks on their Plaza dipped way.

“Don’t put the whole steak in your mouth at once. Take it one bite at a time. And remember, you’re only as good as your last haircut.”