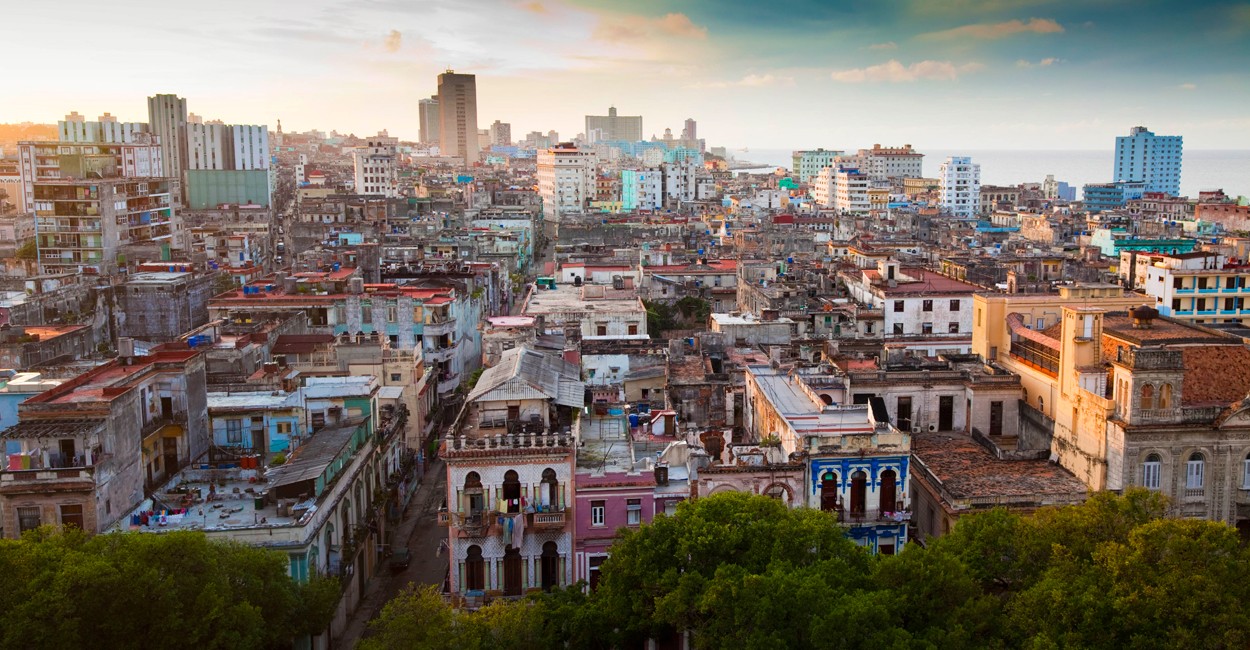 by Peter Delevett, an award-winning travel writer and a columnist at the San Jose Mercury News. His 14-month, 14-country backpacking trek through Asia and Europe formed the basis of the forthcoming travel memoir, Walking on the Moon. He and his family live in one of America’s three remaining Japantowns.

Earlier this year President Obama eased restrictions on educational and religious trips to Cuba that had been tightened by his predecessor; the Treasury Department now is hammering out rules to cover cultural exchanges. I was fortunate in 2003 to sneak in a trip to Havana just before Dubya clamped down, so for those considering a jaunt to the Pearl of the Antilles, here are some ideas for where to go and what to do.

Old Havana is the most picturesque (and most heavily visited) part of the capital. Options for a night’s rest include the Conde de Villanueva, a former villa that’s been converted to a boutique hotel, and the Hostal Valencia, also historic but more reasonably priced (recently listed online around $70 a night).

For about the same price, we fronted up at the Hotel Inglaterra, on the border of Old Havana and Centro – and thus a bit closer to the city’s other sights. The Inglaterra overlooks the Parque Central, where clusters of old men gather night and day for boisterous debates about baseball. One of them asked where I was from, then smiled brilliantly: “America,” he said, “is in the heart.”

Just a block or so away stands the El Floridita, a favorite haunt of Ernest Hemingway. (While it offers great atmosphere for a drink, the food is overpriced and unexceptional.) Walk a few blocks in the other direction and you can view cigar-making at the venerable H. Upmann factory; or check out the domed, lichen-scored Capitol building, where a photographer with an ancient tripod-and-accordion camera can snap a sepia image of you that looks like it dates from 1950.

Havana, after all, is in many respects frozen in time, thanks to the U.S. embargo put in place by John F. Kennedy. The easiest and most memorable way around town is by flagging down a cacharro taxi, one of the fin-tailed remnants of a bygone era.

Moving away from Old Havana takes you through Centro and Vedado, rich with sun-faded colonial buildings so lovely and crumbly they would break a preservationist’s heart. Here you’ll find Restaurant La Guarida, a favorite of Steven Spielberg and the Hollywood set, which sits on the upper floors of a ruined villa that must have been spectacular generations ago.

Vedado is also home to the grand Hotel Nacional, once made infamous by Mafia dons like Meyer Lansky – think “The Godfather, Part II.” It’s well worth having a mojito while soaking up ocean breezes on the veranda. Again, though, if you’re looking for dinner, you’re better off hunting up a paladar, a private home that’s open for meals. In the same way, the cheaper and more unique alternative to a hotel stay in is a casa particular, whose owners are licensed to put up tourists in spare bedrooms; an online clearinghouse can be found at www.casaparticular.info.

If it seems a bit bizarre for a government that preaches Marxism to also encourage its citizens to make a few bucks, well, welcome to Cuba in the new millennium. All over the country loom billboards featuring heroic Workers and Peasants who urge passersby to defend socialism against the imperialistas.

”People here are sick of ideology. The revolution can’t give any more,” said an artist we met in Cojimar, the fishing village where Hemingway set ”The Old Man and the Sea.”

On our last night in town we ate at Cafe Beny More, a spot just off the Plaza Vieja dedicated to the late mambo crooner. At the next table sat a handsome, middle-aged guy in a polo shirt; a younger man beside him eventually leaned over to say, “This man is a famous Cuban musician.” In fact, his friend was Edmundo Pina, trombone player and percussionist for Los Van Van, the most popular band in Cuba.

Pina was charming, no pop-star snobbery about him. He took pictures with us, wrote out the address of his son near San Francisco, then snapped his fingers as the house band started cooking. It was a 10-piece combo of veteran musicians, old men who’d played with More and the original Buena Vista Social Club; though arthritis made it painful for them to shuffle to the stage, once there they pounded congas and blew trumpets and hollered like pups. The diners by this point were on their feet, and I realized Edmundo Pina was leading my wife in a joyful pachanga.

I looked back at the elderly musicians and pondered what a dozen-odd American seniors of assorted races would be doing on a Friday night. Probably hunkering in front of their individual TVs, I decided. Though shortages were everywhere – though the official grocery stores were (and still are) nearly bare – Cubans I encountered seemed to share a genuine affinity for each other, a pride in their little green island and way of life.

The Cojimar artist had told me the Westerners he’d met in recent years all said the same things: “They wanted to come here before McDonald’s, and they wanted to know what will happen after Castro.”

So what will happen, I asked. “Your guess is as good as mine,” he replied, “but I do know this: Cuban Americans won’t come back and run the country. If the people who’ve been living here decide they want change, it will come.”

He may yet be right about the politics. But like it or not, change is coming for Cuba.