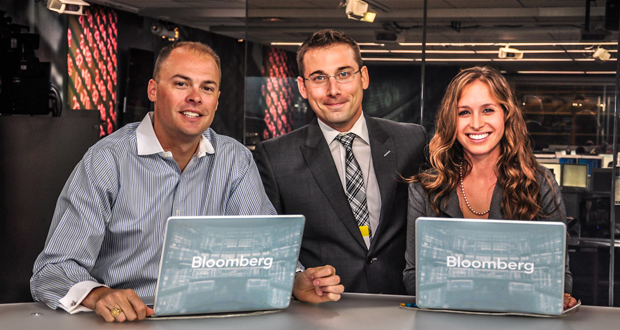 Matt is a stock analyst and international business scholar with a penchant for motorcycles, cars, rock climbing and anything adrenaline inducing. He takes some of that adrenaline junkie fun and brings it to the office, playing squash on the street with a VP, taking his bike to the track, rock climbing  with CEOs or reporting on perfecting your golf game all for the sake of journalistic integrity.

Matt Miller has interviewed everyone from Microsoft CEO Steve Ballmer to THE Richard Branson. We caught him for a candid conversation on his career, favorite interviewees and political leanings.

Alister & Paine: How did you get started in the industry?

Wire journalism was really what got me sucked in at first, and then I was obsessed.

Matt Miller: I was in Frankfurt applying for jobs at banks to trade. I’d go for an interview at a bank and then later in the evening I’d meet my Bloomberg friends at the bar. We’d sit and talk about business and politics and financial news and eventually somebody said ‘Why don’t you just join us and write for Bloomberg?’ I was hired on the spot. When September 11 happened the NYSE was closed for four days and our US television channel needed more content. They called around to the various market capitols and asked for someone to come on and talk about what had happened.

Print journalists notoriously hate TV and think these television anchors are so shallow…everybody had that attitude in the newsroom, except for me. I said ‘Oh, I’ll go on TV!’

Alister & Paine: Tell me about the inception of Bloomberg Rewind.

Matt Miller: At one point we realized we had all of these interviews from huge names like Steve Ballmer and Tim Geithner, and after one airing the interview was lost forever. I asked if we could have an hour at the end of the day where we could use the most important interviews, with a short intro from me. It evolved from there. It’s kind of like a ‘Talk Soup’, especially since everyone thinks I look like Joel McHale.

Alister & Paine: You covered a story about an entire football team getting kicked off the team, and received a signed football from them. What’s your position on college athlete’s compensation?

Matt Miller: Not only do you have figure out how much money they’re making for the school and the NCAA you have to figure out what getting paid will do to their amateur status. If a football player at Ohio State is paid 300k a year then the women’s volleyball team will want to be compensated as well, but obviously they don’t bring in nearly as much revenue so then you have title 9 issue. Those kids should be compensated somehow. A lot of them have no money and they are making literally tens of millions of dollars for the school.

Alister & Paine: Who have been some of your favorite interviewees over the past few years?

Matt Miller: Ray Lewis. I expected to be terrified of him because he has a killer rep. He’s huge and I thought he might think I’m just a little geek on the NYSE. He was one of the most intelligent, most well-spoken, incredibly telegenic people that I’ve interviewed.

I’ve made a lot of really good friends from interviewing people that I find fascinating. David Tice is incredibly intelligent, very successful. He’s a total Austrian school economist but he’s also an awesome dude, he loves Zeppelin and rides around Dallas on a Vespa. He really is a Hayekian. David definitely changed the way I think about economics and the way I think about business.

Rick Wagner is one of the most interesting and most important. When I was interviewing him the General Motors story was huge, still is.

Alister & Paine: What is the big story in the marketplace today?

Matt Miller: I was so interested in micro at the time, the companies and the individual stocks. But one of the things I’ve become more interested in since anchoring television shows is the macro picture. It’s become so much more important to the average investor. Macro moves the market now.

Matt Miller: Hayek! Have you seen the Boom and Bust rap video by John Papola? I love it so much that I still play it to myself at my desk sometimes. After I saw that video I started checking out old Hayek interviews and Friedman interviews, watching Ayn Rand interviews.

Alister & Paine: What do you think about the success in the House of the Audit the Fed bill?

Matt Miller: I tend to love stuff like that. This is where I try to separate my personal leaning with my anchor personality on air. I’m a little bit nuts. I’m making an extra serious push right now to remove my bias, to go back to my journalistic roots. The Republican Party is changing and going in a different direction. The Tea Party side wing of the Republicans seems to be really changing it and taking over, and this may be the last time you have an old school establishment Republican candidate.

My personal leanings, I always seem to go very extreme. Probably too extreme. I love the spirit of Ron Paul, for example.

Alister & Paine: What would you do with 24 hours in the White House?

I’m selling my Vespa, and my German friend asked why don’t I just donate it. I said I would, but I paid 46% of my income to taxes.