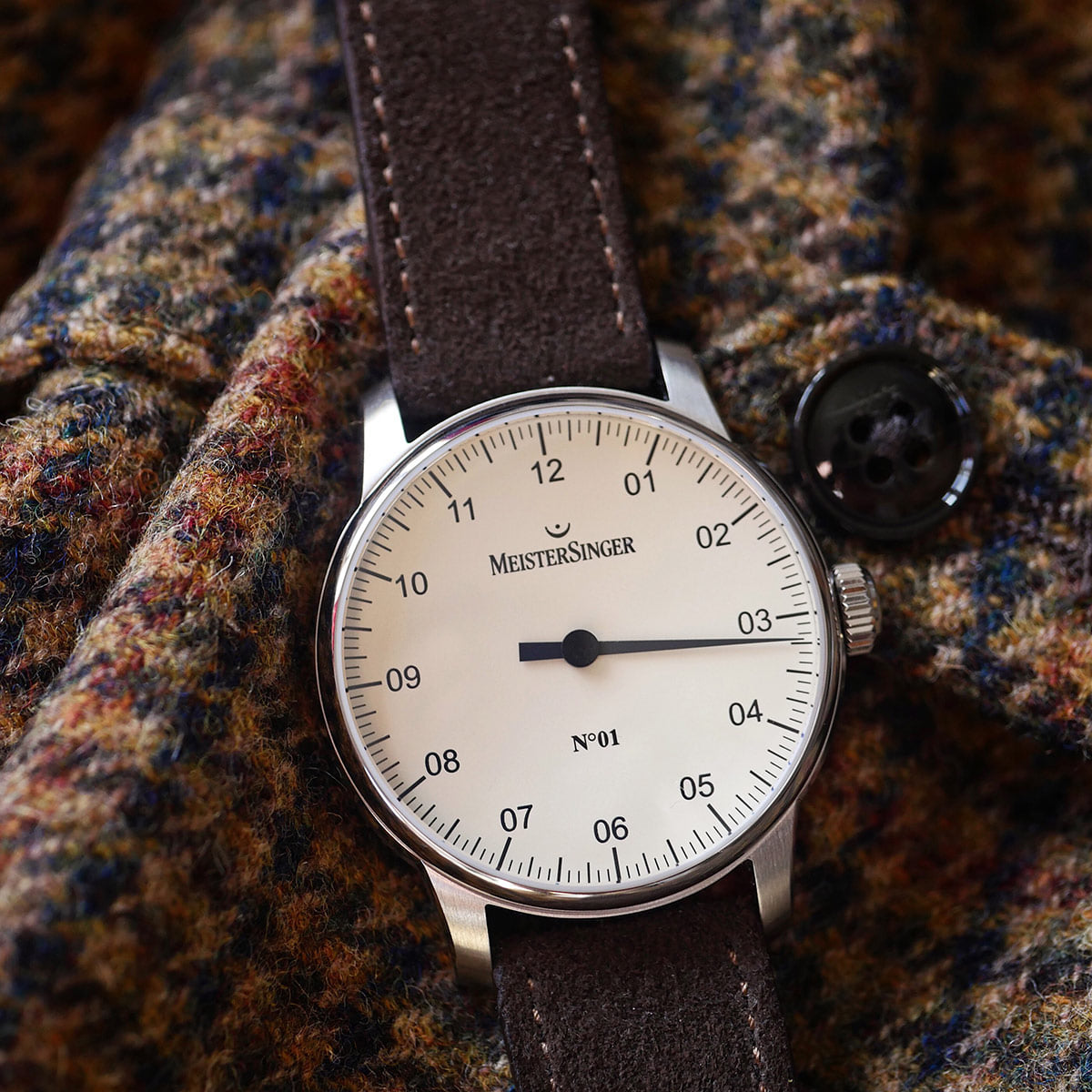 Manfred Brassler revolutionized the watch industry when he launched, MeisterSinger, a German timepiece company that would use single-hands exclusively. The concept was to go back in time. In the earliest days of measuring time, back to the sundials even, a single hand was used. It was precise and beautiful.

Mr. Brassler wanted to escape the brand environment of luxury timepieces today, where design can be overcrowded and more isn’t always more. With a focus on functional simplicity and clarity he concentrated on the essentials of design and created an iconic brand that manages to stand out from its rivals in an oversaturated industry.

We sat down with him to find out how he launched the brand into legacy status success and how our ancestors lived on subjective time, so it’s time we did too.

Alister & Paine: Tell us about the history of MeisterSinger.

Mr. Brassler: After selling my previous company I wanted to work with mechanical watches. My goal was to combine good design with excellent technology.

I had observed over the years that newcomers with uncompromising modern design combined with mechanical movements were rarely successful. My goal was to go back and combine modern technology with a more classic approach.

I wanted to take the watch out of the mechanical watch field where hundreds of brands compete and to put it back into the box of measuring instruments. I wanted to detoxify the watch and make the time display very archaic and simple. I had the single-hand sundial in the back of my head.

This is how the N° 01 was born and it was also the start of the success story of MeisterSinger.  The result was so impressive that to this day we have left this basic CI of the N° 01 in all its variants and changed it as little as possible. The N° 01 hand-wound and the optically identical sister N° 03 with automatic movement are still the heroes of the collection – after 20 years. I think it’s a style icon. Time goes beyond such classics.

Alister & Paine: What is the meaning of the brand name, MeisterSinger?

Mr. Brassler: The real centers of the German watch industry were traditionally next to the Black Forest and the region around Glashütte. After the unification of West and East Germany, significant brands such as Lange & Söhne or Glashütte Original entered the market. My goal was to start a brand that should be recognizable as a typical German to anyone.

In the search for the name I came across “MeisterSinger von Nürnberg”, an opera by Richard Wagner. The decision for MeisterSinger was spontaneous and I have no regrets.

Alister & Paine: You previously created and sold the watch brand Watch People, how did that experience prepare you for MeisterSinger?

Mr. Brassler: Even back in the 80’s, I was very ambitious. Good watch design was not a matter of course these days. Because of the sheer volume of novelties that our customers expected from us year after year, it was like a crash course in design for me. The best basis for my dream to develop real mechanical watches and bring them to the market.

Alister & Paine: Why do MeisterSinger timepieces only have one hand instead of two or three, as is conventional?

Mr. Brassler: In a way MeisterSinger is going back to the future. Back because we show watches that work only with one hand, just like the first mechanical watches of the outgoing middle age.

With the beginning of the industrial revolution it was needed, to educate people to be right on time at a production line, otherwise it would not have worked.

But who has thought then, that the minute- and hour hand would be ruling even in our private life. Little kids live according to their subjective time. Just like our ancestors.

We allowed ourselves to be slaves of an objective time. But we are not made for that. Now we see, that if the pressure becomes too strong people tend to get unhappy and sick. MeisterSinger for me is the perfect symbol for deceleration.

Mr. Brassler: There is an attitude behind MeisterSinger that makes our timepieces very precious. What people see, is obviously the single hand. But that it is not a joke, because we show time in a humane way.

A watch from MeisterSinger reminds us to take our time. Perfection doesn’t come in seconds. Good things take time! A customer once put it like this: “My MeisterSinger is the first watch that gives me time.”

Of course, a MeisterSinger is not for everyone. Just as little as nowadays a philosophy of deceleration seems attractive to everyone.

Alister & Paine: Which is your favorite MeisterSinger timepiece and why?

Now is the Best Time to Grow Your Small Business

Mr. Brassler: My favorite is always the watch that we are working on, which we are perfecting. And we want to make every watch really perfect.

I am particularly proud of our Circularis with the in-house movement. For me it is an almost perfect watch where everything is right. The design, the technology and how everything combines to form a perfect unit.

It is also nice that the watch has received several awards for excellent design. That we managed to do it as a small company is amazing.

Alister & Paine: What is your vision for the future of MeisterSinger?

Mr. Brassler: I believe the philosophy represented by MeisterSinger is unique and perfectly fitting into our time (pun intended). MeisterSinger has a clear message. Let me explain it like this:

It is said that the old Indians checked their important decisions to see whether they would have no negative consequences even in the 7th generation.

We are light years away from such an attitude today. The sheer greed rules and everyone cares only about his advantage now and immediately. The consequences are catastrophic. In my opinion, we have lost our balance. If you no longer expect fulfillment on the inside, you look relentlessly regardless of losses outside.

Maybe I would sell watches anyway. But I think it’s a good thing that MeisterSinger watches in a way also represent my attitude of life. An attitude of finding oneself instead of expecting happiness from wealth and external things. Look at it: We are richer than ever and not a bit happier.

Again: MeisterSinger will be successful because we need to slow down and it is the perfect reminder to do so. Far from religion or esoteric I would say:

“Come off it, find yourself!”