by Peter Delevett, an award-winning travel writer and editor at the San Jose Mercury News. His 14-month, 14-country backpacking trek through Asia and Europe formed the basis of the forthcoming travel memoir, Walking on the Moon. He and his family live in one of America’s three remaining Japantowns.

Growing up on the Gulf Coast a few hours east of New Orleans, I spent plenty of time in the Crescent City. I later lived there for four years, part of which time I worked for the New Orleans Jazz & Heritage Festival. Jazz Fest 2010– which kicks off April 23 and runs through May 2 – can be a proverbial embarrassment of riches, with hundreds of acts on a dozen stages. Here’s one music lover’s cheat sheet to searching out the best of the local bands. 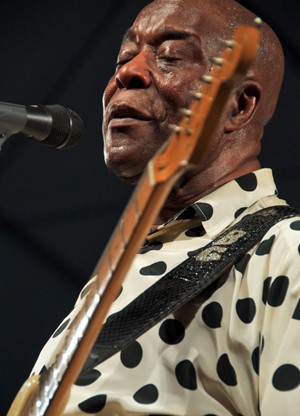 Friday: The fest’s opening day tends to be the most low-key, as the out-of-town crowds generally target the second weekend. First Friday is a good day for “fest sharking” – circling from stage to stage and seeing which unexpected pleasures snare your fancy. You might start out at the Jazz & Heritage Stage to check out the Comanche Hunters, one of city’s unique Mardi Gras Indian tribes. Local legend Frankie “Sea Cruise” Ford takes the Acura main stage at 12:45, but the first “must-see” act for my money is Jon Cleary, a Brit who plays rollicking, barrel-house piano. Stay right there at the Gentilly Stage for the one and only Dr. John at 3:30; then you could do a lot worse than R&B queen Irma Thomas’ tribute to the late Mahalia Jackson, who played the very first Fest. Nathan Williams & the Zydeco Cha-Chas are a fun way to end the first day.

Saturday: In the mood for something zany? Tin Men, a washboard/tuba/guitar trio, opens the main stage. A tribute to the late blues diva Marva Wright (12:05 at the nearby Blues Tent) is sure to be touching and terrific, and at 1:50 you’ll want to catch local rock maniacs Cowboy Mouth on the main stage. Swing back to the Blues Tent at 2:40 for a trio of stellar local piano players – Davell Crawford, Jon Cleary and Dr. John – then back once more to the main stage for the truly legendary Funky Meters, forerunners to the Neville Brothers and the house band on such soul classics as “Lady Marmalade.” For something a bit more traditional, Dr. Michael White blows jazz clarinet in the Economy Hall tent at 4:30. Finish the day with Baton Rouge swamper Tab Benoit, or if you’ve still got the energy to dance, there’s Rockin’ Dopsie Jr. and the Zydeco Twisters.

Sunday: OK people, still with me? Then start your morning with chicory coffee and ol’ blues cat Henry Gray, a former Howlin’ Wolf sideman. Next, choose between two young jazz studs: Donald Harrison or Terence Blanchard. (Blanchard’s sitting in with the Preservation Hall Jazz Band, so he gets my nod.) Still feeling jazzy? Jeremy Davenport, a protégé of jazz patriarch Ellis Marsalis, plays the Jazz Tent at 12:55. While you’re in the neighborhood, amble over to the Gospel Tent for a set or two (how can you go wrong with a group called the Electrifying Crown Seekers?); then head back to the infield scrum to hear long, tall Marcia Ball on the Gentilly Stage at 4. And when it’s time to close out the fest’s first weekend, bypass the brand-name carpetbaggers like Anita Baker and the Allman Brothers to catch the Hot 8 Brass Band on the Jazz & Heritage Stage. Trust me: no brass band in New Orleans right now does a better job purveying this vital, home-grown music.

Now I obsess about food perhaps even more than music, so here’s a few of my favorite snacks to get you through the Jazz Fest.

In Area I, crawfish bread is an institution, and I also like the crawfish sack/crawfish beignets combo. In Area II, the pheasant, quail & andouille gumbo is as good as it sounds, Crawfish Monica is another institution, and the crawfish & spinach bisque from Jamila’s is NOT TO BE MISSED. (If you should happen to find yourself in uptown New Orleans during the weekend, Jamila and her husband Moncef run a charming Tunisian bistro.)

It’s actually pretty much impossible to have a bad meal at the festival, although it’s very possible to blow a mint. Still, don’t cheat yourself of the experience; it’s just as special as the music.