by Peter Delevett, an award-winning travel writer and editor at the San Jose Mercury News. His 14-month, 14-country backpacking trek through Asia and Europe formed the basis of the forthcoming travel memoir, Walking on the Moon. He and his family live in one of America’s three remaining Japantowns.

Thursday: Coco Robicheaux, Blues Tent, 11:30; Ivan Neville (son of Aaron), Acura Stage, 1:20; Sunpie Barnes, Congo Square, 2:05. Then check out one of the two zydeco acts playing at 3 — Geno Delafose and CJ Chenier are both sons of legenday zydeco artists (John Delafose and, of course, King of Zydeco Clifton Chenier). At 4:20, Paul Sanchez would be fun to catch; he’s one of the co-founders of Cowboy Mouth, who are unbelievable live. There are no “wow” local bands closing out today’s fest, so take your pick between Elvis Costello or Widespread Panic on the main stages. 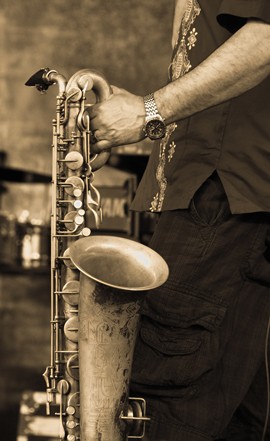 Friday: spend the morning in the Gospel Tent, because the first must-see isn’t until Astral Project takes the Jazz Tent at 1:30. Then you’ve got some tough choices clustered together: the subdudes at 2:10, Kermit Ruffins at 2:35 and John Mooney at 2:55. If I had to choose just one of those, I’d probably catch Mooney; but if you’re more into trad jazz than swamp blues, Ruffins is tough to beat. Next: you should absolutely see Allen Toussaint. He’s the godfather of New Orleans music, period. If you decide to ditch the Aretha Franklin crowds at the end of the day, the Iguanas closing out the Fais Do Do stage would be a smart choice; very danceable and fun.

Saturday: If you find yourself at the Fairgrounds early, you’ve got dueling members of the Big Three families of New Orleans music (those being the Nevilles, the Marsalises and the Batistes). Charmaine Neville, whose dad Charles plays sax as one of the Neville Brothers, puts on a fun, jazzy show; Russell Batiste is an amazing drummer, and while I haven’t seen his eponymous band, there’s sure to be a lot of funk. In the noon hour, the Dirty Dozen are the bridge between traditional brass bands and younger keepers of the flame like the ReBirth, but you should really catch piano player Henry Butler. Plus, you can see the ReBirth at 1:55! After that, do yourself a favor and see Cajun stars Beausoleil at 2:50. Then you’ve got another couple tough choices: Sonny Landreth plays mean slide guitar, but Pete Fountain is a living legend – OR, you could hit the Gospel Tent to see Aaron Neville. Unless you’re big into Pearl Jam, this might be a good day to head back to the French Quarter early and start (or continue) drinking.

Sunday: Some fun traditional music to start the day: Hazel & the Delta Ramblers are a good bluegrass outfit, but I might be tempted to check out the Creole Zydeco Farmers, who I’ve heard great stuff about for years. In the “Is He Still Alive?” department, there’s Frogman Henry on the main stage at 12:30. But if you really want to see a legend of New Orleans R&B, catch Irma Thomas on the same stage at 1:50. Warning: this will almost certainly preclude you from seeing Trombone Shorty, who does a great mashup of brass band and hip-hop; but as a reward, toward the end of Irma’s set you can slip into the Gospel Tent next door to catch the Zion Harmonizers. (If you think you can only get your spouse into the tent once while you’re there, I’d see these guys before Aaron Neville; they’re not technically the greatest-sounding gospel group you’ll hear at the festival, but they’re all like 120 years old and incredibly powerful.) If you stay in the Gospel Tent, the next act is Davell Crawford – an amazing and energetic young piano player and singer whose granddad was the great Sugarboy Crawford. You can sneak out halfway through to catch Ellis Marsalis, dad of Wynton and Branford, in the nearby Jazz Tent, then be in prime position to reclaim your blanket in front of the main stage in time to see Van Morrison at 3:35. (If the Morrison crowds are just too crazy, your secret bailout option is young zydeco stud Keith Frank on the Fais Do Do stage.)

Lastly – Quint Davis, who programs the festival, is closing the two big stages with the Nevilles and the Radiators, as is traditional. You really can’t go wrong with either, but the Nevilles are, as they say, the Heartbeat of New Orleans. And if you head out early to beat the crowds, you should absolutely stop at the Jazz & Heritage stage to finish up with Mardi Gras Indian tribe The Wild Magnolias, who I’d put on any short list.

Check out Part I of Peter’s Jazz Fest picks here.