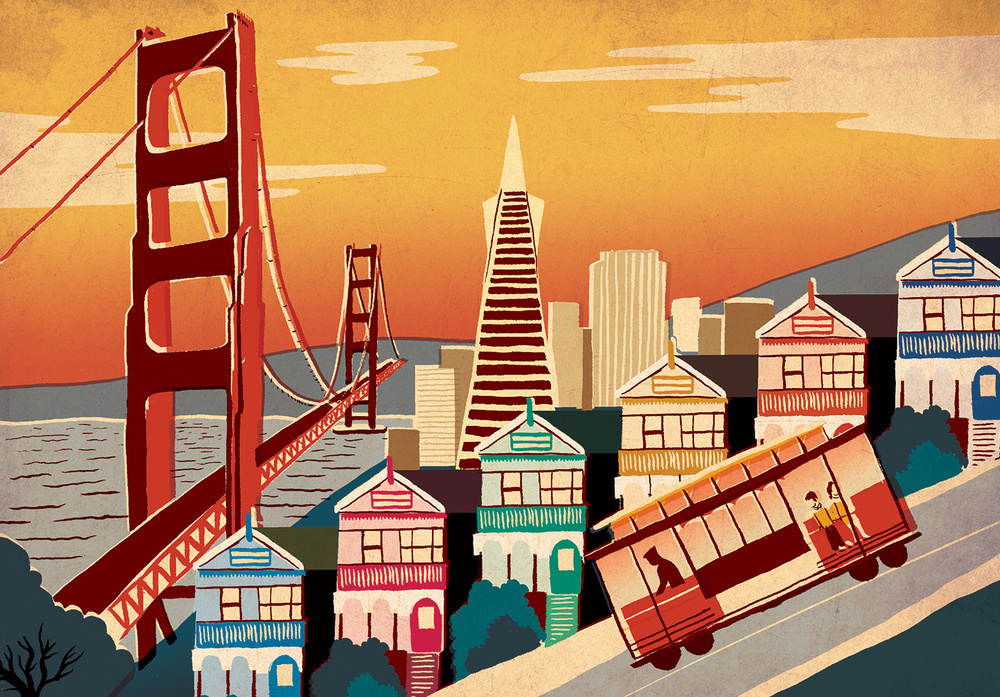 Leave Your Car, and Your Heart, in San Francisco

By any measure, San Francisco is one of the world’s great cities. But by one important rubric – size – it may not have a peer. At a svelte 46 square miles, the City by the Bay is far more walkable than sprawling London or Tokyo. And since most of what you really want to see lies within a five-mile band, you can hit the highlights in a few hours’ walk – a nice alternative to, say, the subways of Paris or Manhattan.

Start your day at Union Square, more or less the city’s commercial and cultural hub. Specifically, start under the square: ditch your car at the subterranean garage that’s ringed by Louis Vuitton, a flagship Macy’s and the stately Westin St. Francis. Walk east down Maiden Lane, a charming two-block thoroughfare that by day is blocked to motor traffic, then hang a left on Grant Avenue and through the dragon gates of Chinatown.

Sure, locals will tell you that Grant is for the tourists and that the neighborhood’s real core is parallel Stockton Street. But Stockton’s a utilitarian thoroughfare; you won’t wander past the likes of the Wok Shop or the Kite Shop or Buddha Lounge or Gold Mountain Sagely Monastery, where you can practice meditation should the fancy strike.

Since you’re just starting your day, that means breakfast; and Grant Ave. and its tributaries offer no shortage of places to nosh, from the relatively upscale (Empress of China) to the deliciously down-market (Sam Wo). My favorite spot for dim sum, though, lies just outside of Chinatown proper, across Kearny St. City View Restaurant doesn’t actually have a view, but the dumplings are top-tier; be sure to peek into the kitchen at the enormous steamer baskets.

Back on Grant, it’s always interesting to check out the New On Sang poultry market, even though the sale of live animals for food has come under fire in this liberal city. By now, you’re at the border of North Beach – technically, San Francisco’s Little Italy, but also the headquarters of the Beat Generation, who paved the way for the later flower children. Turn right into tiny Jack Kerouac Alley and you find yourself in perhaps my favorite spot in the Western Hemisphere: on one side is City Lights Bookstore, still run by poet Lawrence Ferlinghetti, who was tried on obscenity charges in 1957 for publishing Allen Ginsberg’s “Howl.” Just across the alley is Vesuvio, the watering hole of choice for Kerouac, Ginsberg and legendary hipster Neal Cassady. An Irish coffee would be entirely appropriate here.

It’s an uphill climb to your next destination, but the vistas from Coit Tower atop nearby Telegraph Hill are worth the puffing. The Bay sprawls out beneath you, jeweled with famous sights: Alcatraz, winding Lombard Street, the Golden Gate Bridge. To return to terra firma, follow the delightful Filbert Street Steps, which descend in tiers past gardens and wild parrots to the Embarcadero. You can go all in for kitsch at this point by meandering to the edge of Pier 39, which features more stunning bay views and a seasonal chorus of basking sea lions.

Maybe I’m a sucker, but I’ve always preferred the pier’s trendy ambience to the crassness of neighboring Fisherman’s Wharf. Still, past the end of the wharf lies a chocoholic’s Mecca: Ghirardelli Square, a Wonka-like former chocolate factory where a namesake ice cream parlor still serves up decadent cocoa and hot fudge sundaes. Waddle outside to Hyde Street and hop a cable car, which after rolling through swanky Nob Hill will deposit you back at Union Square.

Granted, this car-free itinerary leaves out some of the city’s other top neighborhoods, like the Castro, restaurant-packed Cow Hollow, the gritty Mission District or the hippie haven of Haight Ashbury. But you can always catch those another day. And with Bay Area gasoline prices among the nation’s highest, maybe you can afford to be a little footsore.