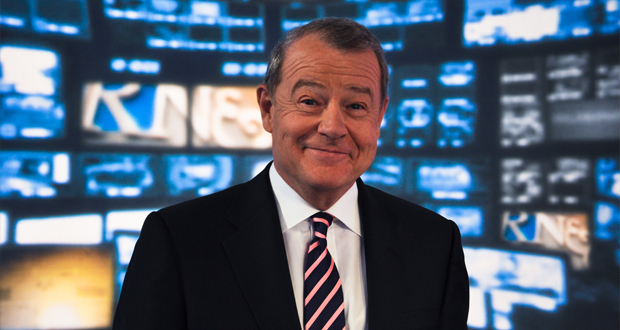 Stuart Varney is a born and bred Brit bleeding red white and blue with more charm and charisma than he knows what to do with. Stuart headed to San Francisco to break into American media in the ‘70s and was promptly told his fetching accent stripped away his credibility for serious news journalism. Years later he finally broke into the business and was the first person to broadcast from CNN New York, day one of the network.

We chatted with Stuart about everything from fixing the economy to his nickname Reg (derived from the obscure comedian Reg Varney, who happened to star in a show about bus conductors…while Stuart was actually a bus conductor).

Alister & Paine: How did you get your start in the business?

Stuart Varney: I had been travelling around the world for years and ended up in Hong Kong as the assistant manager of a bar. One night there were a bunch of American and British marines and it was clear they were going to have a brawl. I’m not very good at preventing fights; I’m a pretty small guy. Watching my abysmal performance that night was a fellow who ran Radio Hong Kong. He said ‘You know, you shouldn’t be doing this’ and I agreed with him. He gave me an opportunity to become a radio reporter in Hong Kong, I passed the test and quickly realized ‘I really like this’.

Alister & Paine: Tell me about this tree farm.

Stuart Varney: We bought this large chunk of land about two and a half hours outside of NYC, a big retreat out in the country. We had people knocking on our door saying ‘Can we log your property? Your trees are valuable!’ So I looked into it and we created and made a tree farm. It’s a type of business that’s completely unconnected with investing, television, Wall Street. You’re out there in the country and it’s just a different world.

Alister & Paine: So do you like working at your Catskills cabin or Fox studios better?

Stuart Varney: Oh, that’s a tough one! I prefer to make my living in television because I like to be part of what’s going on and at the center of the action. There’s a certain level of excitement in that. It’s very nice to have this secondary line of this business to retreat to when you’re able to. If push comes to shove, I’ll do television. I’m a lucky guy, I can do both.

Alister & Paine: Who are your top three CEOs of all time?

Stuart Varney: Steve Jobs. I don’t think anybody created so much wealth for so many people, touched so many people’s lives in such a positive way, changed technology and the application of technology in quite the way he did and frankly, I don’t think anybody has been as great a retailer. Have you ever been into an Apple store? It’s a great model. Steve Jobs is right up there as a great retailer as well as a wonderful capitalist, inventor, innovator, cultural guy in the technology field, that man’s right up there.

Fred Smith, founder and CEO of FedEx. That was an incredible idea when he came up with it in the ‘70s. He almost ran out of money and for a while he was relying on his pilots to put the jet fuel bill on their personal credit cards. He did that, and he survived.

Jack Welch. He’s the man who grew a massive conglomerate and made it even bigger and wildly profitable, introduced a new management style.

I’ve done interviews with all of these guys over the years and watched their enterprises grow very profitably and brilliantly and I’d pick them out as the best I’ve ever known.

Alister & Paine: How do you think the loss of Steve Jobs is affecting the industry?

Stuart Varney: We lost a great capitalist and a great innovator. It’s hard to see that Apple will retain its position, I think it will for several years as Jobs products keep going through the pipeline but I don’t think you can replace the man.

Stuart Varney: I remember my own youth and I was intensely idealistic in just the same way some of the youngsters are down on Wall Street but I don’t think they’re realistic and they’re attacking the wrong target. The Occupy Wall Street people are hard left mixed in with a lot of crazies and I don’t approve.

I’m not a socialist. I’m a market oriented capitalist kind of guy and I’m not sure what we’re going to do with them. It’s a very muddled message. It’s hard to take that kind of movement seriously, and what surprised me was when President Obama kind of associated himself and his campaign with them. They are a very extreme group, and now the President says I understand their frustration with Wall Street and the banks. Really?!

Alister & Paine: What would you do with 24 hours in the White House?

Alister & Paine: What would you do to fix the economy?

Stuart Varney: Tax reform takes a lot of different forms but the one that I would propose and fancy is you lower tax rates for corporations and individuals. At the same time, you get rid of a whole bunch of deductions and so called loopholes. Everybody pays a lower rate but the amount of money that goes into the treasury goes up.

Stuart Varney: All things must pass. This too shall change. And it will. At heart, America is a dynamic, youthful, capitalist society.