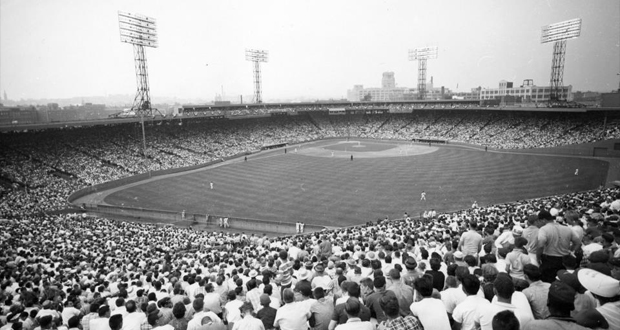 Some evening this summer, a Boston Red Sox player will connect with an inside fastball and launch a drive deep to left field. As the ball lofts against the backdrop of the Green Monster, Fenway’s 37-foot-high left-field fence, a stream of associations will flit through the subconscious of every Red Sox diehard. Of Carl Yastrzemski deking opposing batters into believing he was going to catch their wall-bound fly balls, so they’d stop running. Of Carlton Fisk’s extreme body language urging his shot to stay fair to win Game 6 of the 1975 World Series. Of Bucky Dent’s infamous 1978 popup that rode a tailwind over the wall and took the Yankees over the Red Sox with it. And, unavoidably, of loopy outfielder Manny Ramirez’s occasional disappearances into the wall (through the door used by the scorekeeper) between innings for reasons that are, and probably should remain, mysterious. Like a Faulkner novel, every play at Fenway brings with it the ghosts of earlier iterations.

This spring, Fenway park turns 100 years old. There has been change. A modest upper deck has expanded in recent years. Seats were added atop the Green Monster in 2003 and down the left field line in 2008. The garage door in the center field fence, just one of the many bizarre structures in play at Fenway, now opens onto the new “Bleacher Bar.” Still, this is your grandfather’s Fenway Park. The bones have not changed. The wooden 1934 grandstand seats were clearly built for people of a less ample age. The leftfield scoreboard is still hand-operated. That single red seat amid a sea of green seats in the centerfield bleachers, 502 feet from home plate, really is where Ted Williams hit the longest home run in the history of Fenway. (“How far away must one sit to be safe in this park?” asked the man plunked in the noggin by the blast.)

Other than Chicago’s Wrigley Field, two years Fenway’s junior, no parks remain that have hosted many generations of fans, players, and moments. That’s an essential pleasure of baseball, which is alone among major sports in having non-uniform playing fields. In baseball the park really does shape the game, and no park shapes it quite like Fenway, because no park is as weird as Fenway. It seems constructed from spare parts. But it comes by that weirdness organically. Like a ramshackle New England farmhouse, Fenway is the sum of a century of ad-hoc additions and renovations—patchwork solutions to old problems. The Green Monster, for example, is 37 feet high because Lansdowne Street bumps hard against it and can’t be moved.  That’s too close to home plate, so the only way to make a home run sufficiently sporting was to build the wall insanely high. In neither height, angle, nor materials does it remotely match the center field wall (17 feet high) or the right field wall (4 feet high), itself a 1940 addition that veers inexplicably toward the Mass Pike halfway along its length and meets the center field wall at an apex 420 feet from home plate. Those who have driven into Boston immediately understand that the geometry of the park mirrors the maddening layout of the city itself.

Yet the park’s myriad angles and the incongruity of its elements have helped to give each little chunk its own identity, which helps to explain why, like any New England town with a long history, virtually every patch of ground comes with a place name. In addition to the Green Monster, there’s The Triangle (that deep wedge of centerfield where balls go to die), Williamsburg (the bullpens added in front of the right field fence in 1940, which brought the fence in by 23 feet so that Ted Williams could hit easier home runs), and Pesky’s Pole (the right-field foul pole, at 302 feet the shortest home run in the Major Leagues, named for bantamweight Red Sox shortstop Johnny Pesky, who rarely cleared the fences in larger parks).

In 1999, the Red Sox announced plans to move the team into a modern park with more seating and better amenities. Fortunately, they couldn’t make the real estate part of the plan work, and in 2005 they officially abandoned the idea.

Thank goodness. It would have been like one’s grandparents selling the old farmhouse and moving into a condominium. More convenient, yes; but diminished. In a sport where the players come and go every few years, and where even the ownership is ephemeral, what gives the games continuity and weaves them into the narrative of our lives is the land, and the stories that it holds.

Where to Stay: Hotel Commonwealth
For years, Kenmore Square was a dump relegated to college students and even sketchier subgroups. Then the boutique Hotel Commonwealth came along and anchored a breathtaking revival. Half the hotel’s rooms have a stunning view of Fenway Park, just a block away; you can actually see seats inside the park. True baseball nerds will want to spring for the 600-square-foot Baseball Suite, with its shadowboxed collectible baseball cards (1933 Babe Ruth, 1941 Ted Williams), signed baseballs by Sox legends who have rested their heads there (Carlton Fisk, Jim Rice, Johnny Pesky), and tasteful original artwork of subjects such as the interior of the Green Monster. Be sure to visit Boston’s best known mixologist, Jackson Cannon, at his miniature new lab/bar The Hawthorne  in the basement.

Where to Eat: Island Creek Oyster Bar
Sometimes change is very, very good. I was surprised how painlessly I ditched my former pregame ritual of a beer and a sausage on Yawkey Way for my new ritual of a Sam Adams and a dozen oysters at the Island Creek Oyster Bar. Throwing back Island Creeks, Wellfleets, and Glidden Points in this light-filled space, which takes all its design cues from the Island Creek Oyster Farm (including one giant wall lined entirely with oyster shell) feels quintessentially New England. In addition to oysters, there are, of course, steamers, clam chowder, and lobster rolls, along with wreckfish ceviche and lobster roe noodles for those who don’t mind tinkering with tradition.