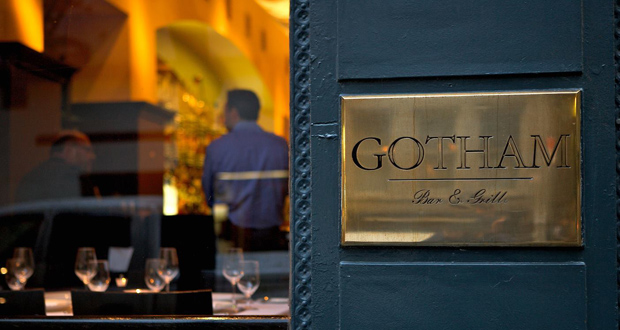 In 1984, Gotham Bar and Grill introduced Chef Alfred Portale to the culinary world. 28 years later, the creative genius has taken his outrageous menu and turned it into a solid New York staple. The original concept for Gotham was sophisticated food in an inviting setting…the result was a ground breaking eighties-style grand café that has since mellowed into classic American cuisine executed in true passionate perfection.

The focus here is technique and execution, from the incredibly rich risotto appetizer to a melt in your mouth warm chicken confit with trumpet mushrooms, frisée and a sunny side up farm egg. The ingredients shine in simple dishes that are fresh and enticing without being too fussy or ‘overthought’. It’s a more practical than intellectual approach to food. Everything is very seasonal, changing from day to day with farm fresh ingredients and a Greenmarket Prix Fixe lunch special.

The (seemingly) simplest dish of all, listed as a ‘Chocolate Cake served warm with seasonal ice cream’ is an incredible way to end an adventurous tasting. Melt in your mouth sweetness, a miniscule dollop of syrup and savory salted caramel ice cream makes for one hell of a desert. Here it’s all about celebrating classical cuisine slanted with whimsical modern twists.

I was kind of a unique commodity back in the 80s, because there weren’t many great, great restaurants in New York. I was young, I had CIA experience, and I had worked with three three-star Michelin chefs, including Jacques Maximin. So I was pretty hot shit. – Chef Alfred Portale

The best part is the decadent food paired with an easy going attitude. The staff is accommodating and knowledgable while the kitchen is efficient and swift. It’s a perfect spot for that special client you’re looking to impress—they can bang out a three course lunch in under an hour, with no signs of sloppiness to show for the rush. Plus, you’re in the Village so you seem much trendier than any Midtown chain you could take them to. Presentation is beautiful on every level…nothing is coming out of that kitchen without being triple checked for artistic excellence.

Chef Alfred Portale’s cuisine has influenced the culinary scene far beyond the restaurant’s walls.  One of the driving forces behind modern American cuisine, Portale helped revolutionize the way Americans dined in the 1980s—thoughtfully breaking with French conventions, calling on previously unfamiliar ingredients from around the world, and exhibiting a fierce devotion to seasonality.

To this day he consistently drives himself to create new, of-the-moment dishes that keep the Gotham experience fresh and exciting year after year.