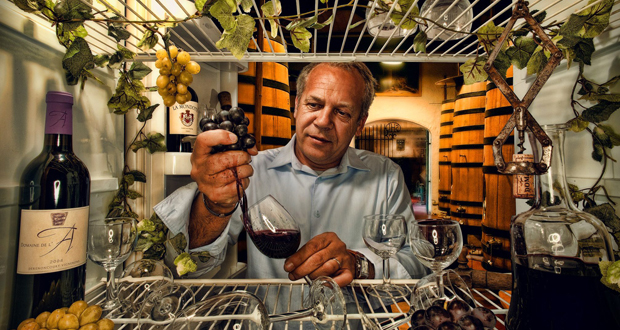 [review] In less than a century, California has established itself as one of the major areas for the production of great Bordeaux style wines. The richness and diversity of California’s soils and exposures is what motivated Stéphane Derenoncourt, the famous French vigneron, to embark on a new oenophile adventure – a stylistic exercise unique from anything he had done before. For the past seven years Stéphane has been focusing on creating a range of great wines in California, choosing the vine parcels from different locations where altitude and exposure allows him and his team to preserve the freshness of the fruit and the balance of the wine.

The story of Stéphane Derenoncourt’s career is one of a man mastering his craft the right way – from the bottom up. He is now considered by many to be one of the best winemakers in France and Bordeaux’s most sensitive vintner, but Stéphane comes from humble origins. Born the son of a steel worker in northern France, Stéphane developed a taste for manual labor and a love for nature early in life. In 1982 at the age of nineteen, he hitchhiked to Bordeaux on a whim, took a job as a vineyard worker in Fronsac. The love affair began right then and there. For the next decade, Stéphane lived, worked, and breathed in the vineyards of Bordeaux’s Right Bank, becoming intimately familiar with the life of the vine and each plot of land’s capacity to stamp its unique qualities on its grapes.

Today, Stéphane consults for over sixty wineries in nine different countries in Europe, the Middle East and Asia. The consistent quality of his work with his keen ability to express through his wines the uniqueness of the land from which the grapes come have earned him a reputation as one of the most sought-after winemakers in the world. In addition to his consulting projects, Stéphane has two wineries of his own – Domaine de l’A in Bordeaux and Derenoncourt California in Napa. Derenoncourt California’s inaugural vintage, 2006, marked the first wine he has ever made in the United States. We had a chance to taste one of Stéphane’s masterpiece from Derenoncourt and catch up with him about his love of the grapes and inspiration behind each bottle.

He told us, “I came in Napa for the first time in 2005 on a consulting project. The volcanic soil were new to me and of course I loved the light. I was intrigued by the place and the challenge of creating my own project in a new playing field. The California project is designed to seek out and work with the most interesting high elevation vineyards to maximize the intensity of the fruit while giving a sense of place. We’ve evaluated hundreds of blocks during our scouting’s. There is still opportunity to develop great vineyards in northern California and not only in Napa.”

We tasted the luscious 2009 Howell Mountain Cabernet Sauvignon…absolutely sublime. Sourced from a tiny parcel in one of Napa’s most hallowed vineyards, nestled among pine and redwoods high atop Howell Mountain, the wine offers a masterclass in Cabernet: profound richness lifted by luscious acidity, supple tannins enveloping the mouth like warm satin, power wedded with precision, stately and pure – and a finish that resonates through the palate like the final chord of Beethoven’s Ninth ringing through a cathedral. There are summertime flavors that want to stay with you here—freshly picked blackberries, minced mint leaves, and ground espresso beans. Every bottle lives up to Stéphane’s reputation and then some. With only 95 cases produced (at $175 a bottle) make sure you pick some up before it’s sold out—one of the most striking wines we’ve yet to taste.

Michael’s on the Hill

Stéphane credits his success to the many years he spent working in the vineyard, learning the subtleties of soil, vine and climate that are essential to crafting wine that is fresh, sensual and – above all – honest. An avid proponent of natural viticultural methods and minimal intervention in the cellar, Stéphane seeks through each of his wines to “draw out the identity of the locality and imprint it on the fruit,” in order to present the wine enthusiast with a pleasurable and profound terroir experience.

“I like to make wines of ‘terroir’, that reveal the identity of a place. There is no technical or rational definition to account for the word but it starts out as a sub-soil, a soil and an exposure that generate a micro climate. Then the choice of plant material introduced by generations of growers through their experience and history, combined with the type of cultivation promoting taking root to the parent rock, will draw out the identity of the locality and imprint it on the fruit. Giving expression to a “terroir” could be assimilated as domesticating a place, but we are often reminded to stay humble before the complex work of nature.” I draw my inspiration from the parcel. I love to imagine the wine to be produced by evaluating the soil and the quality of the clays.” – Stéphane Derenoncourt