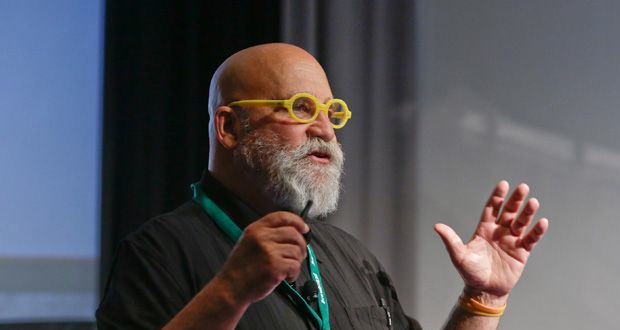 Alan Newman is not your typical brewer. With a hearty whole belly laugh, a friendly voice, and a beard white as snow, he reminds me of what would happen if Santa Claus decided to run a brewery in Vermont. It is a magical place, after all. And Magic Hat Brewing Company is not your typical brewery. An entrepreneur at heart, Alan stumbled into the eclectic world of beer brewing when a friend of his who loved to brew as a hobby, Bob Johnson, came up with the idea. They became partners and as they say, the rest is history.

Alister & Paine: So tell me a little bit about how Magic Hat got started. Where was the idea, the drive? How did this all get started?

Alister & Paine: Has this always been your dream, have you always been into brewing your own beer?

Alister & Paine: So you’re one of the founding fathers and president of the company, correct?

Alan Newman: That is correct but my official title is Conductor of Cosmic Symphonies.

Alister & Paine: Speaking of beer, I love Number 9. Which one is your favorite?

Alan Newman: You know it’s like asking somebody what’s your favorite kid. Haha. If we’re making it I probably like it, and you know I move around a lot. We have a new winter beer called Howl coming out and I’ve been drinking Howl a lot, before that I drank a lot of Circus Boy; I drank a ton of Number 9. I drink most of the things we have.

Alister & Paine: Tell me about your Mardi Gras charity celebration.

Alan Newman: We started a Mardi Gras parade [for] downtown Burlington in 1995 a year after we started the business. The idea was just to give something back to the community and to give back to all the people that had been supporting our business. Over the years it’s kind of grown; today we serve about 25,000 people for it and we have a non profit partner who we work with, the Women’s Rape Crisis Center in Burlington, and from the parade and a combination of sources they make about $20,000 a year these days.

Alister & Paine: That sounds like an amazing party that really gives back.

Alan Newman: It’s absolutely fabulous it’s been 18 degrees one time it was as cold as 20 below, we’ve done it in snow it’s really amazing.

Alister & Paine: Anything else charity wise?

Alan Newman: On election years we do a series of bar promotion called “Participation” and we really encourage kids to register to vote–and to vote–and we have a relationship with HeadCount to help register the people at the bar promotions.

Alan Newman: From a business perspective we’re pretty apolitical. We encourage political action but we really do not promote a specific agenda; the whole purpose of Participation program is literally to get people to understand the different issues have them understand which politicians support the views that they like, regardless of what their political persuasion is.

Alister & Paine: Does that make you an Obama fan, personally?

Alan Newman: Ummmmmmmmm. [Long pause] I would have to say that I’m certainly an Obama sympathizer. I think he’s in a tough spot. I find him fascinating. I did vote for him. I went to the inauguration; me and a couple million of my best friends went to party and wish him well. You know he’s our president, I hope he can have a real positive impact on the country both internally and externally.

Alister & Paine: What do you envision for the future of Magic Hat Company, anything fun and new on the horizon?

Alan Newman: We kinda don’t understand why more beer companies don’t have more fun. We’re not here to save lives, we’re here to have a good time and enjoy what we’re doing.

I’ll drink to that.