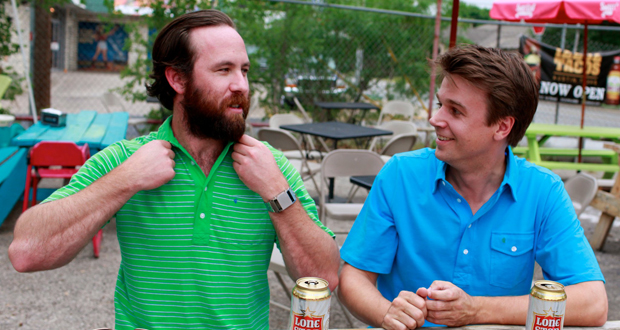 At the age of five, Billy Nachman and Hobson Brown were forced into their first collared shirts to attend an all-boys school in New York City. Although initially squirmy and uncomfortable, the boys quickly began to notice the power of the polo: the approving nods from parents, the lingering glances from the ladies…Thus began their lifelong journey to find the perfect shirt.

Over the years, the two sampled polos of all shapes and sizes: baggy, fitted, emblem/no emblem, collar up, even a brief flirtation with the cringe-worthy double-layered. Throughout this odyssey, there were some constants- perfectly worn hand-me-downs and thrift store treasures. There were the golf shirts Billy’s grandfather wore in the 70s; a great polo Hobson picked up on vacation that cannot be found anywhere since in the continental United States. Flash-forward to 2010, when Billy, bemoaning the disappearance of his favorite inherited golf shirt, sought consolation and advice from his good friend Hobson. Over missed putts and cold beers, they lamented their losses, and the fear of never finding THE ONE again.

They decided it was time to take matters in their own hands. Tapping Billy’s architecture background and Hobson’s creative wizardry, the pair set off to design a vintage-inspired shirt, combining old-school preppy with more sustainable design choices, that would put an end to their ongoing search, while also aligning with a more environmentally friendly lifestyle. With a nod to the past and the hope of a more sustainable, stylish future, Criquet was born.

Alister & Paine: Tell me about the inception of Criquet – where did the concept come from and how did you bring it to life?

Billy: Hobson and I always loved the vintage, classic golf shirt that Jack, Arnie, and Seve used to wear back in the day.  They were versatile shirts that looked as good off the course, as on.  That being said, the only place that we could find these shirts were either in our fathers/ grandfathers old collections or off the rack in some vintage store.

We know that there are a lot of men like us… classically-styled, forward thinking guys who appreciate this type of shirt (and timeless style).  We felt that there was an opportunity to build a lifestyle brand, rooted in golf, that catered to their needs and stylistic sensibilities.

Alister & Paine: What’s the history with the Doctor Jack?

Billy: The Dr. Jack is named after my grandfather, Jack Nachman.  He was not actually a doctor, but quite often, he thought he was (maybe familiar?).  I found the shirt in his closet, around 1993.  It was one of his old golfing shirts that he probably bought in the early 80’s.  I tried it on and it fit like a glove. It was a navy, 4-button placket, crisp collared shirt that had a special quality to it… I could wear it on the course, and it made me feel connected to the game in a different way than any other shirt that I golfed in. On top of that, I could wear it out at night, and would always get compliments.  It worked in both worlds, which is hard to find today’s word of super-performance golf apparel.

Alister & Paine: How does it differ from the typical polo shirt – what makes it perfect?

Billy & Hobson: We took this classic shirt and improved upon it.  By adding the removable collar stays, we have the upper hand in the fight against bacon collar.  By using super soft, 100% organic cotton, we offer a natural alternative to the ultra high-performance, super shiny, golf apparel on the market.  Our shirts look great on the course, but are versatile enough to wear at the office or out on the town.

Alister & Paine: How do you stay relevant in a seemingly oversaturated industry?

Billy: We think that there is a thirst for what we are doing.  It is an overly-saturated market, if you are looking purely at performance golf wear, but there are few companies who are committed to using 100% cotton, and we really believe that there are a lot of guys who are more old-school in the way that they dress.

Additionally, since Hobson and I are marketing to guys like ourselves, we are able to speak in an honest voice, which our customers understand and appreciate.  We have found a healthy balance between being serious about what we do, without taking ourselves too seriously, which I think parallels the way we look at our lives and our golf games.

Alister & Paine: What is the company culture at Criquet like?

Billy & Hobson: In the beginning, the culture was what you might expect from 2 lifelong friends who were lucky enough to grow  a business together… lots of back and forth on ideas, lots of laughs, lots of late nights,  and unfortunately not enough golf.

Around the Table with Brendan Marshall, CEO of Kitchit

As our team has expanded, we have made it a goal to keep the work fun, while making sure it gets done.  We all believe in what we are doing and the direction we are headed.  There are no assigned desks, which encourages collaboration and the exchange of ideas.  The Clubhouse, as we call are office/showroom, features Austin’s shortest driving range (a 500 sq. ft. putting green is in the works), a liquor and beer sponsor, and a space for live music.  Having been a primarily e-commerce model, The Clubhouse offers our customers a chance to touch and feel the product, and get a glimpse of the day-to-day operations.  It gives us the opportunity to put faces to names, shake their hands, and thank them.

Alister & Paine: What’s new and on the horizon for Criquet?

Billy: In  December of 2013, we introduced our line of button-down shirts, which marked an expansion of our product offering into the lifestyle segment.  They have been very well received and we have another large expansion of product scheduled for Fall of 2014.

Additionally, we are also looking to grow our wholesale revenue and are looking for retail partners (both green grass and boutique) that we feel are a good fit for the brand. We want to continue grow primarily as a direct-to-customer business, however we feel that healthy wholesale partnerships will only enhance the brand.  We currently have retail partners in 8 states, with significant growth anticipated over the next 12 months.

Alister & Paine: Who are some of your favorite entrepreneurial heros (and why)?

Billy & Hobson: The one who comes immediately to mind is Yvon Chouinard, who founded Patagonia in 1972 with the goal of providing the highest quality product while maintaining a commitment to environmental stewardship and activism.  We have so much respect for how he built his brand, his company ethos and mission, and his commitment to quality (and his customers).  The brand has become synonymous with “doing things the right way,” and throughout the years, has built a large, dedicated, and committed population of customer advocates.

We have often described Criquet as a country club Patagonia, and while we have a long way to go to achieve the success and respect that Patagonia has earned, we feel like we are the right path.