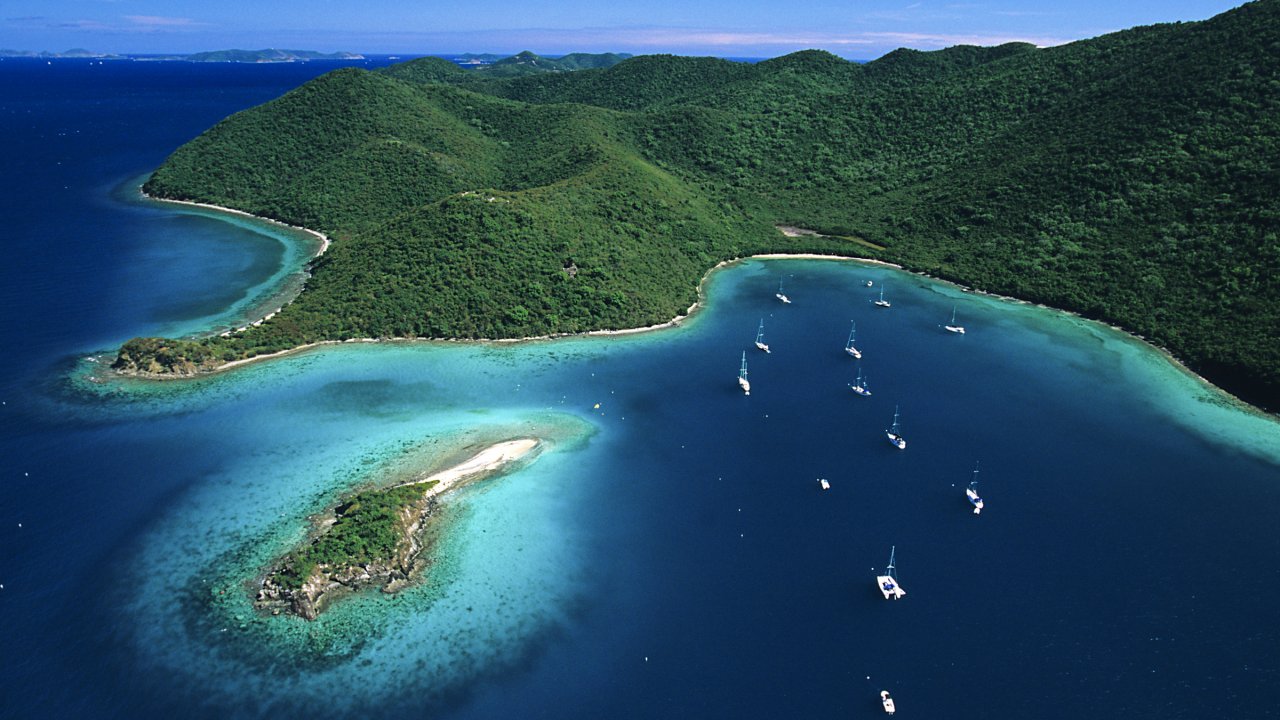 Escape Reality With a Weekend Vacation in the U.S. Virgin Islands

Somewhere in the world, while your toes suffocate inside those boots and your collar itches at your neck, someone is stripping off their clothes and running into a turquoise bay of freedom. That someone could be you, if you follow our lead and book a flight on a whim and find yourself on a fantasy getaway.

Island life is not a gimmick—it’s a true change of atmosphere. There’s something about the salt in the air and the constant sun that just makes you happy. Don’t try to resist it, just grab a margarita and give in. With this hot mess Stella hanging around NYC for a few days, we decided to give in to our warmer impulses and see just how much fun we could have with one island, four days and two expired passports.

The beautiful thing about the U.S. Virgin Islands is that there is no passport required, no visas, just a valid United States license and you are golden to travel internationally-esque. Of course, the British Virgin Islands are supposed to be pretty spectacular too but if you, like us, are procrastinators with wanderlust and spontaneity, it’s always nice to hop somewhere tropical without the hassle and fuss.

FLY IN EARLY ON A FRIDAY AND JUMP ABOARD THE FERRY TO ST. JOHN

Make sure you grab one of the direct early flights without potential connection issues so by 3pm you are having a cocktail on the beach with your toes in the oh-so-refreshing water. As soon as you arrive, open your heart to the sky, feel the sun in your soul and hop on the ferry and head to St. John, the much smaller and most laid back of the islands. St. Thomas is the larger, more city like island, and St. John is where you go to get away from crowds and really just chill.

Grab a Bushwhacker from any of the local bars dotting the beach where the ferry arrives, and literally watch the stress of your daily life evaporate from your body. The Bushwhacker is the USVI’s signature cocktail of choice, a lethal Long Island iced tea level potency concoction that contains Kahlua, Baileys, Amaretto, Bacardi black rum, Crème de Cacao, and all sorts of milkshake like deliciousness.

Next, take a star filled ride with Captain Toby of Sail Starlight to your quarters for the evening, a 57’ French Sailing Yacht. We said hello to the affable Captain, were greeted by the loving ship dog Bamboo, and hopped in the dinghy. The salt air in our lungs, Bamboo’s wet nose on our laps, and the vast enormity of the galaxies beyond took our breath away. We rode in silence, the water lapping gently, the boat barreling forward with speed and grace, until we reached what felt like an Atlantis, this mooring where captains, pirates, and adventurers alike spend their wanderlust filled evenings.

The yacht interior feels nothing like you’ve ever been in before, and the French elegance is oh so chic. Wander into the cherry-stained Douka wood paneled Master Suite with the smell of the sea breezing through the cabin windows for a surreal night’s sleep.

SNORKEL & PADDLE BOARD IN YOUR OWN PERSONAL CAYS

Now, most people get to head out with Starlight’s co-captains, Toby and Will, for at least a week. They are partners who have sailed together for years and are super passionate about sailing, cooking, and Bamboo. There’s typically a four night minimum, since you need at least five days to even start to cover what the USVI’s and BVI’s offer. But alas, we were on a tight schedule and were able to fit it just one evening and one day on the yacht, sans Will. In just that one day, Toby took us on a wild twenty four hour ride. We sailed from one amazing snorkeling destination to another, discovered new worlds among the coral and reefs, learned to paddle board, lounged on the deck, swam along the coast, snuggled with Bamboo in the sunshine and feasted on gourmet cuisine and cocktails.

We circumnavigated the entire island of St. John, going to beaches that most visitors don’t even access because they’re on a remote part of the island with limited access by road. At the first hidden gem, Watermelon Cay, we snorkeled (using the boat’s truly fantastic equipment—I’ve never snorkeled without that ‘dammit, saltwater in my nose!’ feeling until I snorkeled with this crew), around a magnificent sandbar so ethereal in its beauty we half expected to see Ariel wash up on shore.

At Lameshur Bay we tried our hand at stand up paddle boarding and ended up in a private cave, the sort that you see in Maldives and Tahiti ads. We took a moment to catch our breath, inhale the exotic unruly nature surrounding us, and let the waves lick our toes as we were once again, speechless. Eventually our appetites caught up to us, and Captain Toby brought us ashore for the next part of our weekend adventures. ‘Anything you would have wanted to change?’ Toby asked us. ‘More time,’ we said in unison, and hugged goodbye, kindred spirits departing.

SLEEP BENEATH THE RAINFOREST CANOPY AT CINNAMON BAY

Imagine arriving amidst the sea of Lily Pulitzer and Tommy Bahamas with an intense backpack and Chaco’s sneaking out the zipper pocket. People give you some strange looks. It’s not Yosemite or a typical ‘camping destination’, and that’s what made camping out in the middle of the rainforest at Cinnamon Bay so wonderful. It’s one of the only places in the entire Virgin Islands that you can camp at, being park of the National Park, and only a fifteen minute car ride from Cruz Bay.

If you’re not staying in a private villa, hell even if you have access to a private villa, there’s something very special about sleeping among the hermit crabs and palm leaves with the sound of crashing waves soothing you to sleep. Just go elsewhere for food…

After drinking, snorkeling, paddle boarding, swimming, lounging, and camping, you’ll be starving. La Tapa is an institution on the island, and not one that rests on its laurels.

With super fresh local fish and veggies and a menu that changes nightly, it’s innovative cuisine in an island setting—no tourist traps or overdone dishes, just absolutely fresh ingredients in a sea-to-table manner. Alex is also an oenophile so the wine list is pretty fantastic and if you overdo it, no worries. You’re in island mode.

TREAT YOURSELF TO A SUNSET DINNER

Before you leave though, you’ll have to have a sunset dinner at the Waterfront Bistro. It’s next to the beachfront bars with their no shoes no worries sort of attitude, but don’t let that fool you.

This is true bistro style fine dining with a relaxed atmosphere but impressive menu. Executive Chef Riah, a new addition in the team 2016, brings his French training and fine dining expertise to the restaurant with a Caribbean twist. The menu focuses on local vegetables and starches, while experimenting with different heat levels and textures.

The macadamia crusted tuna with melt in your mouth coconut rice, pineapple chutney and Thai shrimp sauce is some of the finest seafood you will find anywhere. The service and staff are accommodating, friendly and super knowledgeable, and the sunset unbeatable.

TAKE A PIECE OF THE ISLAND HOME WITH YOU

It’s bad karma to take an actual piece of the island home with you. Follow the ‘Leave No Trace’ mantra while you’re here and leave the island as beautiful as you left it. But bring home heirloom quality jewelry from our favorite jeweler on St. John, Bamboo. It’s impossible to leave this island without feeling like it’s imprinted on your soul in some way. Husband and wife jewelers Chad and Shae Broomfield felt the same way, and eleven years ago they made the leap and moved to St. John from Iowa.

A piece of the island goes into every hand engraved gold charm, every diamond laced anchor. Every bauble is inspired by Chad and Shae’s life on the island in some aspect, so when you go home and put a Bamboo necklace on, you can’t help but be reminded of that heart-to-the-sky-sun-in-your-soul-moment. It becomes part of your everyday lifestyle, just a glimmer of that Caribbean Sea in a perfectly placed diamond and suddenly you’re there, with a Bushwhacker in hand and the salt air in your lungs.